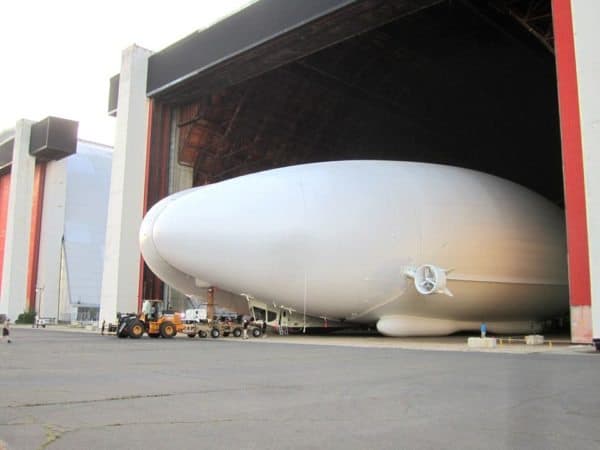 Bigger than a football field, the largest aircraft in the world is a low-carbon, low-noise, low-pollution wonder that soars high. Hybrid Air Vehicles, its manufacturer, is hoping that Airlander 10’s crowdfunding campaign will also reach great heights.

On investment crowdfunding platform Crowdcube, London-based Hybrid Air Vehicles on Tuesday launched a $£2,000,000 campaign for the  Airlander 10, a wing-shaped aircraft that can fly for up to five days at a time if manned, and for over two weeks unmanned, “land virtually anywhere that’s flat, and burns just a fifth of the fuel of a conventional aircraft,” as The Guardian notes.

The aircraft can also reach speeds of 100 mph, propelled by its wing-shaped design, four engines and the 38,000m3 of helium in its hull. The helium also gives it structure–it maintains its shape because of to the pressure stabilisation of the helium inside the hull, and the smart and strong Vectran material that the aircraft is made of, according to Hybrid Air Vehicles, a private UK company with approximately 150 shareholders.

launched to match a £3.4m government grant to get the craft going, and eventually build many more; current investors include the US military, Iron Maiden frontman Bruce Dickinson, PLC Chairmen, experienced business angels and investment professionals, according to The Guardian and Airlander’s campaign website.

A bit of the aircraft’s history, quoting from The Guardian:

The Airlander was patented in 2001 but development hastened with US backing for a potential long-range spy in the sky. Defence cuts and the winding down of the war in Afghanistan led the military to abort its $300m programme not long after the craft’s one test flight at the Lakehurst air force base in New Jersey. […]

What looked like the death knell for the Airlander turned out to be a blessing for Hybrid Air Vehicles, which ended up buying back the aircraft and the intellectual property for just $300,000 having been paid $90m for their services. 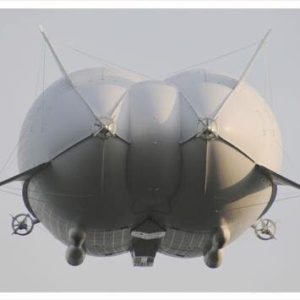 The UK’s ministry of defence is retaining an interest in the airship’s surveillance capability, but HAV says the civilian potential is enormous. Sweden will trial the airlifting of wind turbines to remote parts of the country. Mining corporations, search operations, disaster relief or high-end tourism could all use its technology to fly long-haul to places where infrastructure doesn’t exist or has been wiped out. HAV believes data gathering and communications from airship levels rather than satellite is a further enormous growth market. 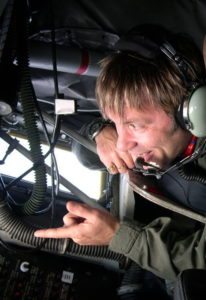 Potential uses for the Airlander 10, other than inspiring dreams of “Castle in the Sky,” pardon my geek, include communication, cargo carrying and survey roles in both the military and commercial sectors.

However, the idea of a giant helium-filled airship floating around has roused some suspicions about issues such as vulnerability to enemy action, including missiles strikes, and in more peaceful times, the weather. Chris Daniels, HAV director, noted, “One of the biggest challenges we’re going to have is to tell the world just how safe this is.”

Responding to criticism of the Airlander 10, Dickinson said,

People say, God, the Hindenburg [the German hydrogen-filled airship that crashed in flames in 1937]. But on this, you are flying the world’s biggest fire extinguisher.

AirLander from Airlander by Hybrid Air Vehicles on Vimeo.