On Tuesday, Crispin Sinclair Innovation launched Babel Bike, the self-titled “world’s safest bicycle,” on crowdfunding platform, Indiegogo. Featuring a revolutionary advanced safety cell, seat belts and steel foot protectors, the bike is designed to protect cyclists from the leading cause of road fatalities, offering them unparalleled protection on the road.

Three years in the making, Crispin Sinclair Innovation has created the world’s safest bike which feature a groundbreaking advanced safety cell fitted as standard. The Babel Bikes are fitted with the highest level of primary safety equipment and are available in both electric and non-electric versions.

Crispin Sinclair Innovation is a London based company with Crispin Sinclair at the helm. From a family of inventors, Crispin’s father, Sir Clive Sinclair, was most famous for the UK’s first mass-market home computers in the 80’s. Crispin follows in his father’s creative footsteps and is ready to bring the world something new.

“Our dream is to put a million more cyclists on our roads, and therefore take a million cars off them, and to do that we need to give cyclists their safety back. As a recent report put it ‘If we can tackle the safety issue, we could open the floodgates to a new era of mass cycling participation’, and that is exactly what we hope to do and with the help of the Indiegogo community.”

According to Transport for London almost 20,000 pedal cyclists causalities were reported in London in 2013. There have been increases in recent years in the number of cyclists who have been seriously injured. In 2013 serious injuries were 31% higher than the average over 2005-09. 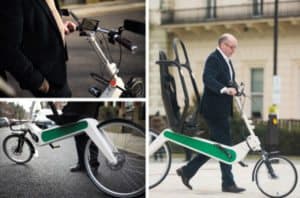 “Bikes haven’t seen significant innovation since the 1884 Rover Safety Bicycle. We are delighted to present the biggest step forward in bicycle safety since then and quite simply the safest bike the world has ever seen. The shape and structure of the bikes helps to reduce deaths and serious injuries from turning lorries and buses at busy junctions – the single biggest killers of cyclists, but of course the bikes still need to be fast and fun to ride.”

The Babel Bike will be available through the campaign with non-electric bikes starting at £1,999. The project is set to close on May 14th.