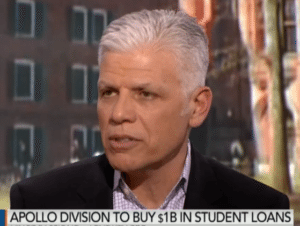 Vince Passione, LendKey CEO, cemented a $1 billion deal to re-finance student loans as he positions his company to challenge marketplace lending platforms like SoFi and CommonBond. This may be the biggest funding deal to date and is just further evidence of the intense interest by institutional investors to push into the p2p lending space. While Apollo committed to the billion amount for LendKey, Bill Ackman was recently quoted on the intrinsic risk associated with student debt to the credit markets. Passione hit the studios of Bloomberg to give his spin on things.

LendKey is an online lender that helps local lenders get into the online lending space. To date the company has facilitated approximately $750 million in loans. The backing of Apollo will see that number jump higher. LendKey believes this is a $200 billion industry.