Taking time away from his work on the set of Mystery Science Theater 3000, creator of the cult-classic Joel Hodgson sat down to discuss the show’s return and its crowdfunding success.

During a recent interview with Blastr, Hodgson discussed the possibility that the Mystery Science Theater 3000 Kickstarter was going to fail:

“People do want to put it into context, like you must be certain or else why would you do it? But that’s not really true. It would have been atrocious if we had tried and nobody would have gotten involved. It would really have hurt us as far as going to Hollywood and talking to them. And the premise of the Kickstarter is not only making shows for the fanbase, but to grow it and get it in front of more and more people. But the fear is really there, and the potential for failure very great. I am super fortunate it didn’t happen. When you’re older, that’s a real problem because you can anticipate trouble, and you can feel it. It is not like when drivers are 18, and can’t foresee their own death. But people who are 55 can do it very easily.”

While explaining where the funds are going, Joel stated:

“That is a really good question, and one of our first questions that came forward. We spent a lot of time – especially the second day, because we raised a million and a half within three hours – answering questions like that. We did a detailed breakdown to show where the money went. With crowdfunding, one of your first jobs is the fulfillment of all the products and things people want, like posters, T-shirts, hats, stickers. The other half of the fulfillment is shows. The cost per episode is about $250, 000. Fifteen years ago it was about $100,000 to make a Mystery Science Theater. My feeling is it’s still kind of in the neighborhood of what they had for the old shows. We also have to figure in the cost of licensing the films — which is not that expensive because they’re not great movies – but it is still in the five figures to do that. I guess the analogy is, even a half hour reality show costs more than that. Even in today’s dollars, it is a really good deal for a 90-minute show.” 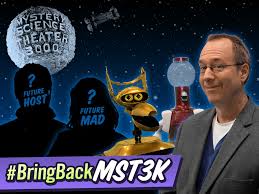 “I am looking forward to it. Again, it was really important that we not get made with that. It was important I wasn’t in a jumpsuit on the front page. That I am just in a sport coat so they know I’m not on camera; I’m just an executive. That was the messaging we had to do. I thought it would be unfair and confusing to go, “I’m going to be back!” and then also put forward these new people. So there’s Joel, the executive, creative lead, or showrunner, and there’s this new array of people. I wanted it to be clear what was happening. But just so you know, I am really looking forward to it. I was thinking about it today when I was on the elliptical. I was daydreaming about a couple characters I’d like to do.”

In regards to alternative ideas to the concepts he has considered and abandoned, Joel added: 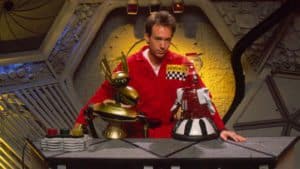 “My job is to correct the things that don’t work. And so, I think that’s one of those things that just works really well. Then, the other benefit is the cast has been completely refreshed. The first day, people were going, “Where’s the original cast? What have you done? What’s going on?” We had to spend this time, a critical second day, writing five answers to five burning questions. One of them was, where’s the original cast. We had to say, what is going to make this show survive is to invite the original cast back. But it’s not about us, it’s the next generation. That was the real scary, real wild, unhinged part of this whole thing. I put my thoughts down, and the fans signed off on it. They understood what I was saying, and my thinking about it in a holistic way. What’s best for the brand to keep it moving, rather than what’s best for your memories of the brand. That was the nuttiest, scariest part. If they had hated that, that would have been it.”