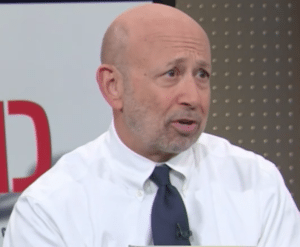 Lloyd Blankfein, CEO of Goldman Sachs (NYSE:GS), was interviewed by Jim Cramer on Mad Money this past week. Blankfein spoke broadly about the status of Goldman Sachs (along with the fact he has started to use Twitter). But one topic of interest was an update on Marcus.

Marcus is Goldman Sachs online lending platform they built from the ground up. Before Marcus was launched, there was considerable chatter that Goldman would partner with, or perhaps acquire, an existing online lender. Instead they decided to go it alone with  Marcus – the name of Goldman’s founder. Marcus provides unsecured consumer loans from $3500 to $30,000 mainly targeting credit card debt refinancing.

Cramer asked Blankfein if Marcus was bringing down the gross margins of Goldman. Blankfein said no. Most credit cards charge 17% and up to carry a balance thus generating an opportunity to come in far lower than that but still make a solid profit (Marcus is 300 to 400 basis points lower). Plus, as Blankfein pointed out, there are no branch offices. No costly physical locations to manage. “There is plenty of room for us to make a great return on this,” said Blankfein.

Blankfein told Cramer that Marcus has just crossed over $1 billion in lending. By the end of 2017, Marcus will be over $2 billion in lending. “We wanted to grow it slow to make certain we are doing a good job … but we are going to grow this thing,” added Blankfein.

You may view the entire interview on Mad Money here.