Tide Banking, a UK-based fintech startup that specializes in online banking, has successfully secured $14 million during its recent Series A funding round, which was reportedly led by Anthemis, with participation from Passion Capital, LocalGlobe, and Creandum. 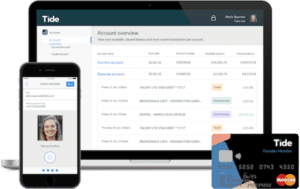 Founded in 2015 by former RBS/Worldpay head of innovation, George Bevis, Tide describes itself as a current account that saves businesses time and money with its tools that automate bookkeeping and make paying/sending invoices quicker. While sharing details about the Series A round, Bevis reportedly stated:

“Our investors believe there is a real opportunity to support and champion small and medium-sized companies in the wake of Brexit. Britain’s smaller firms have been let down by traditional banks, which often charge vulnerable companies eye-watering fees and keep them waiting weeks to open a business account. By providing our members an instant, transparent business credit facility, which for some was difficult to obtain on the high-street, we’re also making it easier for small and medium-sized companies to get the finance they need to grow.”

“Iwoca’s innovative tie-up with Tide will enable small businesses to access finance without ever having to leave the Tide app, making the process fast, simple and hassle-free. Tide have built the integration on top of iwoca’s new Lending API, an industry first solution which opens up our award-winning platform to partners allowing them to fund small businesses directly.”

Funds from the Series A funding round will go towards Tide’s continuous growth and development.