Less than a year and a half after attracting more than $6.6 million during its Testing the Waters (TTW) round on SeedInvest , Keen Home has launched a dual crowdfunding campaign on SeedInvest and Crowdcube. The company has attracted over £2.7 million between the platforms so far. 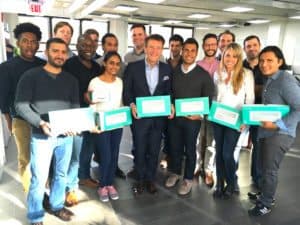 As previously reported, Keen Home started with a relatively small crowdfunding campaign on Indiegogo back in 2014. Keen co-founders Ryan Fant and Nayeem Hussain raised just $40,000, Keen then went on to pitch on Shark Tank.  They got pretty lucky too as savvy partner/investor Robert Herjavec saw the potential for the product and delivered one of the highest valuations ever on Shark Tank. The company stated:

“Keen Home develops proactive hardware and software products to protect and enhance a home’s core systems. The company focuses on innovating in largely overlooked, yet critical areas of the home to provide homeowners with increased comfort, improved efficiency, and a better maintained home.”

Keen Home also stated its first product, the patented Smart Vent System, controls a home’s heating and cooling airflow on a room-by-room level, which studies show results in improved comfort and efficiency. The product originally launched in November 2015, with the first 30,000 units selling out within 10 months of launch. Smart Vents are now distributed in over 500 Lowe’s and 100 Best Buy stores through the US and Canada (in addition to online sales). The company then revealed it is expanding distribution through pro installers and homebuilders. 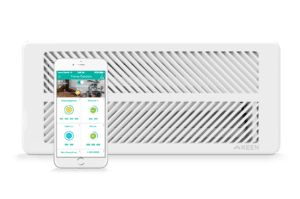 “In 2016, Keen Home launched the Smart Filter product extension. Smart Filters monitor their health in real-time, are specially designed for high airflow, and allow whole-home air purification without the noise, cost, and limitations of stand-alone purifiers. Replacement filters can be fulfilled through an auto replacement program called Keen Air Care.”

Keen Home noted it has strategic partnerships with Google’s Nest and Samsung’s SmartThings, are integrated with Ecobee’s smart thermostat, and claimed it received one of the highest valued offers in the history of ABC’s Shark Tank. To date, Keen Home has raised $4.4 million from investors including Techstars, R/GA Ventures, Rugged Ventures, and American Family Ventures.

Funds from the dual campaign will be used to continue Keen Home’s expansion. It is set to close mid-October.