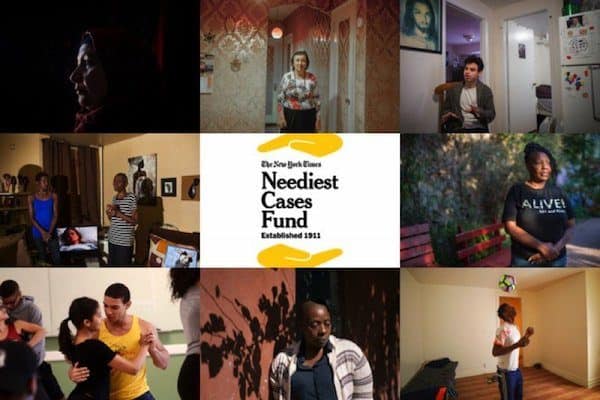 This week, GoFundMe announced it has teamed up with The New York Times to launch The Neediest Cases Fund. This is the second year in its 106-year history that the publication giant has teamed up with the global crowdfunding platform. It was revealed:

“Last year, donors to The Neediest Cases Fund gave more than $6 million to benefit eight nonprofits who serve people in need in the New York area and beyond. GoFundMe is proud to again be the platform behind this yearly giving tradition. Through the power of GoFundMe’s social fundraising, more people can more easily contribute and change lives for the better.”

The duo reported 100% of the amount donated will go directly to support one of these great causes. In addition, The New York Times Company pays all administrative costs of the Neediest Cases Fund so that every gift goes directly to serve the needy. The initiatve story reads:

“On Christmas day, 1911, Adolph S. Ochs, publisher of The New York Times, went out for a walk after a big turkey dinner, and encountered a shabbily dressed man on the street. The man said he had just been given Christmas dinner at a Y.M.C.A. but had nowhere to sleep. The publisher looked him over, decided he looked respectable and gave him a few dollars and his card. ‘If you’re looking for a job,’ he said, ‘come see me tomorrow.’

“The encounter left the publisher thinking about charity. Helping a stranger had given him a sense of satisfaction, and he wondered if one man’s feeling might be the basis for a city’s goodwill. The next year, he sent a reporter to several of the city’s private welfare agencies to collect stories about the poor. He had a plan: to publish articles about the Hundred Neediest Cases in New York. The appeal would be made not with a direct request for money but with the facts of their lives. These small chronicles, it turned out, sounded a powerful call.

“The campaign began Dec. 15, 1912. Soon other publishers in the United States and abroad adopted the idea that a newspaper could make a general appeal for the needy and thus help established welfare agencies solicit funds. The first year’s contributions totaled $3,630.88. The total now is about $6 million a year, and over the years the Fund has raised more than $294 million.

The initiative, which kicked off over the weekend, is set to run until January 12th.