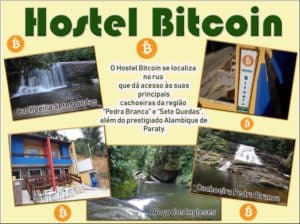 A new bitcoin and crypto-themed hostel has opened in the historical beach town of Paraty, Brazil, Portal do Bitcoin reports.

Rooms, meals and tours at “Hostel Bitcoin” can presently be paid for using regular currencies or bitcoin, though hostel proprietor, Alessandro Santos, says he plans to shortly begin accepting, “what(ever) else we can get through a simple account (at) an exchange like Bittrex.”

Santos says he decided on a Bitcoin-theme for the hostel some time ago after noticing that many foreign visitors to Paraty have an interest in digital currencies.

His impression seems to have borne out: Hostel Bitcoin was tightly booked in the days following its August 16th opening, and tourists have been stopping for photo opps.

“I am…on the route (to) the waterfalls, where several jeeps pass daily with these tourists and the attention they give to the theme is notorious,” says Santos. “Some even ask the jeeps to stop to take photos of the inn.”

Santos has been retail-investing in Bitcoin and various altcoins for the past year, and hopes that success at his hostel will help boost acceptance of digital currencies for payments at other Paraty tourism businesses. “I believe that, having good acceptance, we will be able to expand to the other inns and restaurants in the city.”

Paraty is a popular destination located in the Costa Verde (Green Coast) region of the Brazilian state of Rio de Janeiro.

The town is surrounded by steep forested mountains, tropical islands, waterfalls, beaches and freshwater swimming holes, and is considered safe.

Town architecture has been largely preserved in the Portuguese-colonial style, and monkeys can be seen roaming the cobblestone streets.