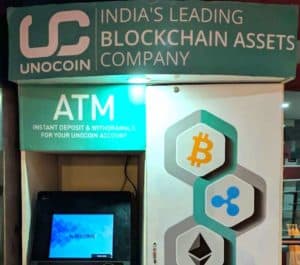 Police in the city of Bengaluru in South India arrested the co-founder of Unocoin Technologies last week after the company allegedly installed a Bitcoin ATM at a local mall without necessary permissions, Times of India reports.

After appearing before a judge at the local chief metropolitan magistrate court, Harish BV, 37, then spent seven days in police custody.

According to Times of India, police say the Bitcoin ATM was a “platform for the buying and selling of cryptocurrencies,” and have stated that more arrests are expected

Police have also warned the public, “not to be lured by the prospect of making huge profits and invest money in cryptocurrencies.”

The other co-founder of Unocoin, Sathvik Viswanath, told Times that his operation and the buying and selling of bitcoins in India are both “perfectly legal”:

“We got a lot of bad press after the finance minister announced a ban in February 2018. The minister’s statement was clear: Cryptocurrencies are not legal tender in India. He did not say ‘illegal tender’. There’s a huge difference. It means you bear the risk of your investment and there’s no regulation for the industry.”

The crypto sector in India has been on shaky ground since last February when Indian Finance Minister Arun Jaitley stated in a 2018-19 budget speech:

“The government does not consider cryptocurrencies legal tender or coin and will take measures to eliminate use of these cryptoassets in financing illegitimate activities.”

When Unocoin announced that it was setting up its cryptocurrency ATM, it said that it was doing so as “a new mechanism” to allow customers to purchase “crypto assets” through its platforms after Indian legislation, (Prohibition on Dealing in Virtual Currencies), “disrupted (the company’s) banking relationships some time ago.”

The company says it planned to set up additional kiosks in Mumbai and Delhi in the weeks following the Bengaluru installation.

According to Times of India, the Bengaluru machine was not yet operational at the time of the police action, and Unocoin has claimed that the kiosk was only in “final testing mode,” and has simply been “temporarily moved from its original place of installation.”

“The reason for panic is because of fake videos on Kannada and English channels. Due to this, our kiosk is not operational. We’ve been trying to actively to get these videos pulled down.”