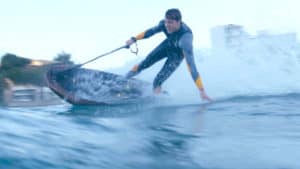 Security token offering platform Neufund is in the midst of its inaugural security offering with the “equity token offering” (ETO) of its parent company Fifth Force Gmbh. CI reported earlier this week that the ETO had easily topped its soft target and now stands at over €3.3 million. The public sale will close next week with tokens expected to be distributed in February marking a significant accomplishment for the compliant primary issuance platform.

According to Neufund, the next four ETOs are already in the queue with several companies seeking a seed or series A funding round on Neufund.

The next four companies include:

Curf Tech – A company that wants to become the “Tesla on water” with its e-jetboard. The Curf boards (electric powered surfboards) are already shipping. CURF reportedly has already secured seed investments from two family offices. The Neufund ETO is considered to be the Series A funding round.

Air Profile – A “wind assessment service” that manages the “unpredictable resource of wind into a safe business.” The company wants to become a global sensor tech firm. So far the company has funded itself from grants and private capital from the founders. An initial contract has been signed with innogy SE, one of Europe’s major renewable energy suppliers.

Agora.Trade is a decentralized exchange that seeks to set a “new security and usability standard for cryptocurrency exchanges.” The company is based in blockchain friendly  Malta. Currently, users may trade Bitcoin, Ether, and NIM and the exchange plans to add a combination of large and established tokens and up-and-coming, small coins with an active community next. Agora.Trade will be conducting their series A on Neufund.

Ngrave has a mission to “render the world of blockchain technology and cryptocurrencies a safer place.” Ngrave is offering an “ultra-secure blockchain wallet solution” for cryptocurrency investments. Ngrave will conduct their seed round on Neufund.

Earlier this year, Neufund shared a slightly longer list of expected issuers which included Uniti, a company that is currently raising capital on Crowdcube but is still in the queue to do an ETO on Neufund.