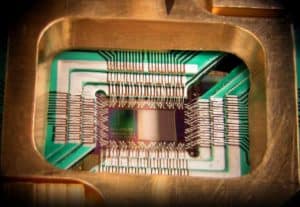 According to the platform, Quantum Resistant Ledger or QRL coin is, “is the brainchild of Peter Waterland(,) who realised that Bitcoin, Ethereum, and other such cryptocurrencies have no protection against future technology.”

According to Coinswitch, “commonly used signature algorithms like ECDSA, DSA, and RSA are vulnerable to attacks by quantum computers.”

They also say that the Quantum Resistant Ledger, “uses the hash-based digital signature scheme to combat the anticipated quantum attacks as it has minimal security requirements and is said to be the simplest to implement among all the quantum resistant schemes.”

Cryptocurrency networks rely on encryption (mathematical scrambling of data) to secure data on their networks.

Data on crypto networks is processed through complex algorithmic codes. Much computing power must be directed against these algorithms to “break” or decode them.

Theoretically, quantum computing will one day be so powerful that it will break modern-day encryption algorithms.

But one person familiar with these matters dismissed the idea that crypto networks will necessarily be broken by quantum computing. The individual said that developments in quantum decryption will be closely tracked by quantum encryption schemes.

Bitcoin programmer Jimmy Song essentially dismissed claims of the imminence of quantum developments that could harm Bitcoin in a 2018 video:

“There’s all sorts of engineering problems in quantum computing that… they’re nowhere near solving.”

“There’s all sorts of coherence issues…you are working at sort of an atomic level. You have a lot of these atoms and electrons and stuff. They have half lives and things like that.”

“Also, to make quantum computing work you have to have something called superconductivity, and that only happens when you are like nano degrees above zero which is obviously extremely difficult to create.”

“…all of the algorithms they’ve developed for quantum computing, they all sort of assume that the computer works perfectly, and most quantum computers are nowhere near perfect and it’s extremely difficult to get them to work well just because of all these…engineering problems.”

A threat to Bitcoin’s security will likely not come from the quantum arena, says Song:

“If there is going to be some kind of innovation that breaks one of these hard problem assumptions that bitcoin relies on, it’s probably not going to come from quantum computing. It’s gonna come from somewhere else.”

“There’s no known algorithm for breaking SHA-256 (bitcoin’s encryption algorithm) anyway, so I don’t know if there is some confusion.”

“Like I said, quantum computers are extremely hyped technology and most of the people in that industry are more or less selling snake oil, I think, and they don’t really know what they are talking about.”

“A lot of people like to sound smart by bringing up quantum computing but if you’ve studied it, in any depth at all…you discover very quickly that the engineering reality is nowhere near what the real reality is.”

In a presentation in 2015, Ashley Montanaro at the University of Bristol confirmed Song’s claims about engineering problems in quantum computing:

“Building a large-scale quantum computer is extremely challenging because of decoherence.”

“If a quantum computer interacts with he outside world and is subject to noise, it can lose its ‘quantumness’ and behave like a classical computer.”

In his November 2018 article, “The Case Against Quantum Computing” Mikhail Dyakonov describes an arms race underway now in quantum computing, while, “Most commentators forget, or just gloss over, the fact that people have been working on quantum computing for decades—and without any practical results to show for it.”

“To my mind, quantum-computing researchers should still heed an admonition that IBM physicist Rolf Landauer made decades ago when the field heated up for the first time. He urged proponents of quantum computing to include in their publications a disclaimer along these lines: ‘This scheme, like all other schemes for quantum computation, relies on speculative technology, does not in its current form take into account all possible sources of noise, unreliability and manufacturing error, and probably will not work.'”