House minority leader and a Republican Congressperson from California Kevin McCarthy repeats appealing claims in his New York Times missive espousing the virtues of blockchain, “Don’t Count on Government to Protect Your Privacy: Let’s look to technologies like blockchain and other innovations to keep our data private.”

But several of McCarthy’s claims are frankly naive and do not bear scrutiny. 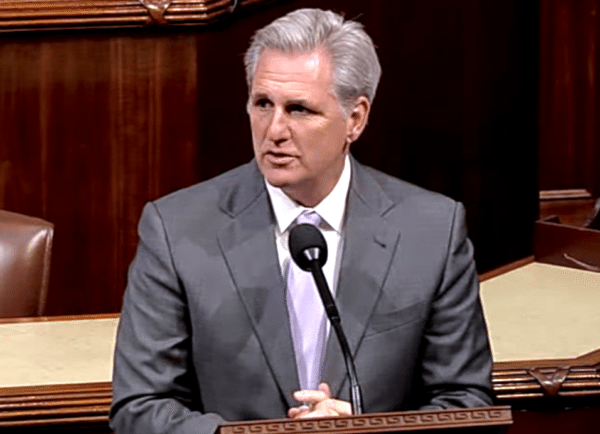 McCarthy begins by pointing out real issues in data privacy increasingly confronting citizens as we quite glibly pass our data to corporations in exchange for the right to share selfies, cat videos and BBQ invitations.
Social media companies, says McCarthy, are effectively “opening our mail” and helping themselves to the contents- but on a comprehensive scale, and he is absolutely right about that.

“Under the current internet framework,” McCarthy writes, “users’ data is usually controlled by the platform — online consumers leave a trail of data bread crumbs, making us vulnerable to privacy invasions,” he continues.

But McCarthy starts to veer away from practical reality after that.

Controlling all of one’s data the way one controls one’s Bitcoins, say, has long been a dream of people hoping to profitably extend Bitcoin’s applications (“blockchain”) across the data spectrum, and McCarthy espouses that dream:

“In a decentralized network, however, our data would be controlled by this blockchain encryption. Users would grant and revoke access to data, no longer entrusting third parties or tech companies with that responsibility.”

But experts have been saying for years that  “blockchains” do not in fact solve problems other than those addressed exclusively by Bitcoin or equivalent (“permissionless value transfer”), and this has been demonstrated again and again.

First, managing one’s private keys for bitcoins, say, can be a complicated prospect for the average person.

Private keys are basically digital passwords needed to transmit cryptocurrencies or encrypted data, and these must be stored, often in an inefficient way such as on a thumb-drive type device.

Private keys must be scrupulously stored because true public blockchains are moderated by no-one and there are no back up systems for restoring lost data.

As a result, safely managing private keys for Bitcoins so far requires the sort of iron-fisted determination usually only displayed by the most determined and organized libertarian subversive.

Here are examples of stories I’ve heard in person:

“I lost my passwords.”

“I dropped a hardware wallet with 100 ethers on it in the airport. I got it back.”

“I threw the computer out.”

“I lost money when the guy running Quadriga died.”

Keeping track of Bitcoins can be hard enough, but storage of all data on true blockchains would spread this risk unmanageably.

McCarthy does not seem to understand this:

“When you purchase or post something on a blockchain platform, the network will verify your identity using an encrypted key that is permanently and exclusively yours (emphasis added). Each action is recorded on a distributed ledger. This will make fraud nearly impossible.”

If you permanently and exclusively controlled and lost your ID profile held on a genuine public blockchain, you would have a hard time proving you exist thereafter.

As far as we know, Bitcoin has never been hacked, but other blockchains, hundreds of related services and thousands of crypto wallets have been.

McCarthy told CNBC today that blockchain is great because it removes the middle man, but so far the only way to make sure a person can access lost monies or passwords transmitted digitally is by having a middle man (third party company) manage a backup data system. It’s that simple.

McCarthy goes on to contradict himself by describing “platforms” (middlemen) furnishing apps built around the blockchains he imagines.

“(T)his technology would increase competition (against big tech),” McCarthy writes, “because blockchain makes it easier for anyone to create an alternative platform for communicating or providing some service. With the open-source nature of blockchain technology, a community of users is free to take what they like from an existing platform to a new one if they feel their privacy has been infringed or trust violated. Accountability is built into the system.”

This week, a project called MyDashWallet was hacked specifically because the project was open source and a bad actor contributed dirty code that they later went back to exploit.

The latter stuff is just nonsense- you don’t need blockchain to walk away from a platform or hold it accountable. And if a platform can infringe on your privacy, you’re not dealing with a real blockchain, you’re interfacing with a privately-managed database- a middleman.

“Private platform” and “blockchain” are smashed together again in this sentence from McCarthy:

“Each new platform is a fresh opportunity for users and creators to interact, shop and communicate without Big Brother or Big Tech tracking every move.”

“Blockchain panacea” proponents have floated putting everything from birth and citizenship records to medical records to academic and work records and even elections “on the blockchain.”

If so, does, “the following statement by McCarthy really make sense?:

“You should be able to see, control and delete your data (emphasis added). These standards have the advantage of being bipartisan, which in today’s Washington is saying something.”

Maybe McCarthy here is referring to “unimportant” data and not all personal data, but if that is the case he should say so to show that he understands.

McCarthy simply does not know what he’s talking about when he writes, “I don’t think… the bureaucratic leviathan has what it takes to develop or enforce nimble responses to rapid change in the technology industry,” suggesting that all this can be done by libertarians’ fantasy, anti-bureaucratic device, blockchain.

When it comes down to practical reality, “blockchains” might automate some functions, but don’t really disintermediate all aspects of trust- they just put different intermediaries.

We do need solutions for the data privacy crisis we are experiencing, but third parties and their platforms will likely always be needed to help manage data and govern.