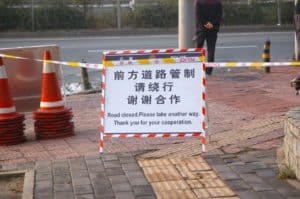 Following reports of multiple “rectification” incidents executed against cryptocurrency businesses in China last week, including alleged raids on a Binance office in Beijing, the People’s Bank of China (PBOC) announced November 25th that it has closed two-thirds of the country’s online lending institutions and 173 cryptocurrency entities.

The announcement comes after financial regulators in Shanghai, Shenzhen and Beijing announced in recent weeks that they were “inspecting” cryptocurrency trading and token issuance entities with the intention of closing them. The deadline they were given to complete the raids was November 25th.

According to “an expert” paraphrased by Chinese state tabloid news outlet The Global Times:

“The move demonstrates China’s determination to guide the country’s economy away from financial speculation, at a time when the country is facing dual pressure from its domestic economic transition and externally from the protracted trade war with the US.”

The closures are announced in a 154-page report issued Monday by the PBOC.

The press release that faces the report notes, “The incremental risks of key institutions and various types of illegal financial activities are effectively controlled, but the stock risks still need to be further resolved.”

Chinese print and televised media followed up on Ji’s comments by lauding blockchain tech, and a ban on criticizing this type of distributed database/ledger tech was reportedly imposed.

Crypto speculation then surged in China, and prices of China-based cryptocurrencies TRON and NEO, for instance, surged.

A number of stock scams were reported as well and the media back-pedaled somewhat by advising the public to differentiate between cryptocurrencies and the tech underlying them (blockchain).

The People’s Bank says it regards cryptocurrency speculation as relevant to national security and financial stability in China:

“The financial market is highly sensitive to external shocks and the market is volatile. Risk cannot be ignored.”

The bank says it has been engaged in, “daily risk monitoring and evaluation…(and a) variety of risk disposal plans.”

It also says it has been careful not to unleash risk while quashing it:

“(I)n the process of risk mitigation and disposal, we grasped the pace and intensity of policies, timely adjusted and fine-tuned (actions), and prevented ‘risks to deal with risks,’ which effectively guaranteed the stable operation of financial markets and financial institutions.”

The bank claims its actions have been successful and that it has, “vigorously rectified the financial order…(inducing a) Sequential pressure drop.”

A surge in the price of Bitcoin attributed to Ji’s announcement appears to have abated in recent days.

The People’s Bank of China says its work is not yet done.

“The report points out that due to multiple internal and external factors, some long-term accumulated deep-seated contradictions in the Chinese economy are gradually exposed, financial risks are prone to occur, and economic growth is facing more difficulties. From an international perspective, the possibility of ‘peaking down’ in world economic growth has increased, and unilateralism and protectionist sentiment have increased worldwide, financial markets are highly sensitive to the trade situation, and uncertainty about global liquidity conditions has increased.”

“Looking ahead, the sources of global economic and financial turbulence and risk points are still increasing, the downward pressure on the domestic economy has increased, and the potential risks are difficult to eliminate in a short period of time.”

“We must resolutely fight the battle against major financial risks, (and) balance the relationship between stable growth and risk prevention…”