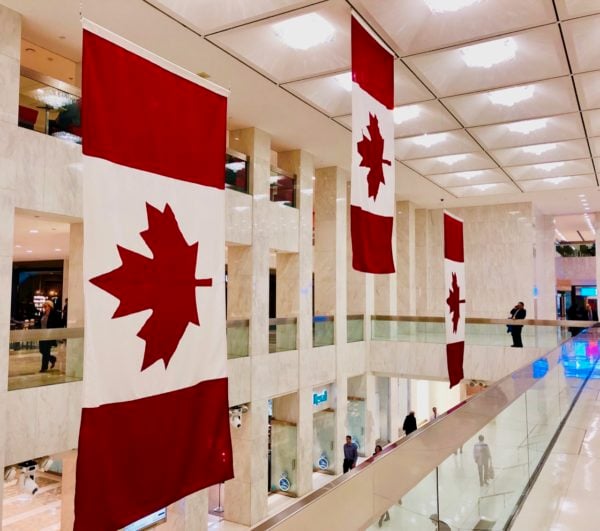 In the speech, Poloz described “major forces acting on the economy…(and) what the Bank will be doing about them.”

With regards to Fintech, Poloz anticipated economic benefits from AI, machine learning and the monetization of big data, but said it could take time for the growth from these to touch down.

“Computers went into widespread use during the 1980s,” he said, “but a surge in productivity growth did not emerge until the period from 1995 to 2005.”

Technology is pushing to generate a “fourth industrial revolution,” but growth remains tempered by macro forces, including fallout from the 2008 financial crisis, a “demographic slowdown,” trade wars and suspicion towards, “critical institutions like the World Trade Organization.”

All told, “near-term risks around productivity growth are tilted to the downside.”

With regards to trade:

“(T)rade conflicts…(and) the emergence of nationalist or populist policies more generally threaten to reverse some of the prior productivity gains made through globalization. Tariffs on imports are forcing companies to dismantle supply chains and create new ones that are likely to be less efficient…companies have cut their investment plans, which also means less potential economic growth in the future.”

Considering all this, “it looks like the global economy is set for continued slow economic growth for mostly structural reasons…(and) low-interest rates are likely to persist too.”

Low-interest rates are a concern, said Poloz, because this could exaggerate household and government indebtedness, “as governments try to kick-start sluggish economies.” 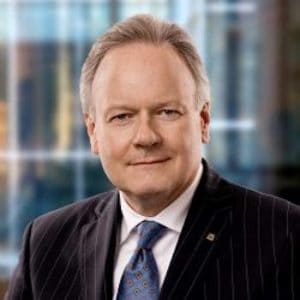 “The world stock of debt of all types is now more than three times global gross domestic product (GDP). Experience shows that high debt levels can amplify the impact of a shock on the economy, such as a rise in unemployment. This is because some borrowers could default on their debts, leading financial institutions to lend less, or even fail. Meanwhile, governments with a high debt load may be less able to stimulate a faltering economy.”

“In Canada, household indebtedness is our most important financial vulnerability. The latest data show household debt is 177 percent of disposable income, a bit below last year’s record high, but still elevated.”

On the upside, Poloz claimed, regulators have learned from past mistakes and have reduced risk by imposing prudent rules:

“Policy-makers have taken the lessons learned from the 2008 global financial crisis to heart. They have imposed new rules on banks around capital and liquidity, and the global financial system is much safer today as a result. Here in Canada, authorities have also imposed stricter guidelines around mortgage lending to help contain financial vulnerabilities. Thanks to these changes, even if household indebtedness rises further, its sustainability is gradually improving.”

All told, “The risk of a surprise outbreak in global inflation is low. But it seems to me that the combination of elevated household and government indebtedness and populist politics holds inflationary potential for some countries.”

Given the current environment, Poloz said, the Bank of Canada has chosen to focus on four areas: inflation-target renewal, monetary policy and financial stability, the impact of digitalization, and the future of money.

The governor notes some growth emanating from AI and big data, but he did not mention blockchain:

“(W)e can see evidence of the spread of AI all around us. Its effects on the economy may be profound…the fourth industrial revolution is likely to follow the pattern of the previous three. We can expect a significant disruption of workers in many industries…(and) new technologies…lead(ing) to stronger growth in sectors where they are deployed. And the higher productivity that will result will increase the economy’s potential to grow. This will create new job opportunities widely throughout the economy, while also causing inflation to fall short of what our models would predict.”

He also says it could take time for wealth generated in the “fourth industrial revolution” to fully disperse, though we may see some short term benefits:

“In the last few years of the 1990s and early 2000s, we now know that productivity rose quickly. But the economic statistics of the time did not capture this until long after the fact because it is difficult to measure developments in new economic sectors. It is certainly possible that the same dynamics will emerge in the near future.”

“In 2020, the Bank will be working hard on new ways to detect and determine the economic impact of the fourth industrial revolution…Of course, we will also continue to talk directly to Canadian companies to gather intelligence on the spread of AI.”

The future of money

Poloz said the bank of Canada plans to work with major financial institutions to modernize its core payments systems, which is 20 years old. With regard to this system, “Most of the work on the new wholesale system should be completed in 2020.”

Poloz also said that, “modernizing the retail payments system is a top priority,” because there are “thousands” more of them.

Poloz says Canadians can expect to execute retail transactions in real-time within two or three years, but blockchain was not mentioned.

Poloz also said he doesn’t see cash disappearing any time soon because its efficacy and resilience are too great:

“I believe that central bank money—the bank notes you have in your pocket—will always provide an important public good: an individual’s sovereign right to make payments with an instrument that is universally accepted and final. A private digital currency cannot deliver that, regardless of how widespread its use may become. The other nice thing about cash is that it will still work even during power blackouts or cyber attacks. As a consequence, bank notes will probably always be around to some degree, if only as a contingency for unusual events.”

The bank remains open to the question of whether it should ever, “issue a currency in digital form as a substitute for cash….(and) will have more to say about this early in 2020.”

“Because these are potentially global…Such innovations will bring new risks to the financial system. We need to understand these risks and apply appropriate regulation. One area of particular interest to central banks is cross-border transactions.”

“Essentially, the idea is that governments that can issue their own currency can never go bankrupt. Accordingly, rather than borrowing from the public by issuing bonds, governments should spend as much newly issued money as needed to keep the economy growing and maintain stable inflation.”

The common understanding is an oversimplification, Poloz contended:

“This sounds like Modern Monetary Theory is offering a free lunch, and most of us know there is no such thing. First, the idea is not monetary. Government spending is a fiscal decision, not one for the central bank. Second, the idea is not modern. It has been tried many times in the past, and the record is not pretty. For example, in the late 1960s the US government was running large fiscal deficits to finance the war in Vietnam. This led to very rapid money creation. The result was a breakdown of the Bretton Woods system of fixed exchange rates and a surge in global inflation spanning the 1970s.”

Poloz said tactics in Modern Monetary Theory are outdated and not very relevant:

Poloz said Canada and Canadians are facing definite challenges, but said Canada has a good track record of weathering economic turbulence and change:

“(C)onsider what we have been through over the past decade—the global financial crisis, the subsequent slow recovery, the collapse of oil prices, and political uncertainty abroad. Despite all of that, Canada’s economy is operating close to capacity, inflation is on target, labour force participation is up across almost all age groups, and the jobless rate is near historic lows.

“(O)ne should never underestimate the ability of Canadians to face and overcome challenges, using the same tools they always have—hard work and ingenuity.”