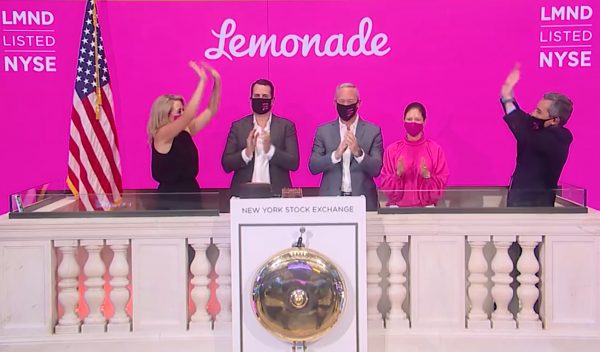 Lemonade (NYSE:LMND), a fast-growing Insurtech firm, completed its initial public offering (IPO) today on the New York Stock Exchange (NYSE). Earlier today it was reported that at the last minute Lemonade bumped up its planned offering price to $29 a share. Apparently, that was not quite enough as demand outstripped supply in early trading and shares opened at around $50 a share as the price rocketed higher.

At the IPO price of $29/share, Lemonade grossed $319 million (before commissions and expenses). The fact that investment management firm Baillie Gifford, based in Edinburgh, indicated its interest in purchasing around $100 million of equity in Lemonade probably helped boost overall share demand. 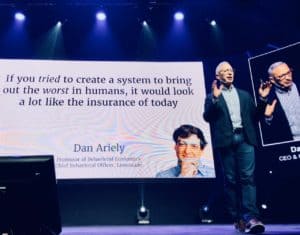 Daniel Schreiber, Lemonade CEO, told CNBC that early trades were not indicative of the story of the company but there is an opportunity to transform insurance – even while shares moved significantly higher:

“We will look at the price of our shares every couple of years and not every minute.”

Lemonade is a digital-first insurance platform that seeks to align the interests of customers with the business. The company was formed based on the fact that most people hate their insurance providers combined with the reality that insurance is a huge industry that is in dire need of digital disruption. Since platform launch, Lemonade has expanded its services to 28 different states in the US as well as Germany and the Netherlands in Europe. Lemonade is licensed in 41 states and expects to cover the entire country in the following months. Also on the road map is to provide insurance services in 31 different European countries.

On its website, Lemonade highlights all of the big-name insurance companies that have seen their customers switch their business to their platform due to its focus on customer service.

“Traditional insurance companies make money by keeping the money they don’t pay out in claims. This means whenever they pay your claim, they lose profit. This is why getting your claims paid fast and in full is sometimes so hard. Lemonade was built differently. We take a fixed fee out of your monthly payments, pay reinsurance (and some unavoidable expenses), and use the rest for paying out claims. In essence, we treat premiums as if they were still your money and return unclaimed remainders in our annual ‘Giveback’.”

Insiders believe that, overall, insurance is incredibly ripe for disruption and the Lemonade team did it right by building a world-class platform while bringing in great people to transform insurance.

Crowdfund Insider spoke with OurCrowd CEO and founder Jon Medved on the day of the IPO. He had this to say:

“We are delighted with today’s IPO for lemonade we are proud of their spectacular team and what they achieved so far.”

Since its inception, OurCrowd has backed several companies that have IPOed like Beyond Meat, Uber, and Rewalk. So far, OurCrowd has booked over 35 exits for its platform investors.

At the time of writing, shares in Lemonade were trading at over $62/share thus more than doubling its IPO price.