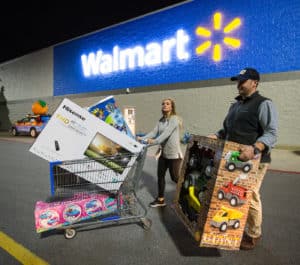 StormX, which allows users to complete gamified micro-tasks or shop online while earning as much as 87.5% cryptocurrency back as a StormX rewards member, is now allowing customers to earn cashback in digital currencies when they shop at a Walmart store.

StormX users will be able to earn up to 4% cashback in cryptocurrency on all purchases from Walmart. Users with a “Diamond” rank or status may get as much as 14%.

Simon Yu, CEO at StormX, stated that the Walmart partnership could potentially bring new users to the service. Yu claims that his company is the first to offer cashback in crypto to Walmart customers.

StormX has partnered with 650 retailers, so that they’re able to offer cashback in cryptocurrency. The partners reportedly include Microsoft, eBay, Nike, Adidas, Target, Dell and Samsung. StormX claims it has distributed over $2 million in crypto cashback to its users.

Yu noted in a blog post that the company’s online sales are up 76% year-over-year. Yu added that since the company’s mobile launch of “Shop” on the StormX app, it’s now at more than 257,000 unique users in only five months.

In 2019, the company added stablecoin Dai and Litecoin (LTC) as additional crypto back options.

During Q1 2020, StormX introduced updates that let users shop with hundreds of stores being supported across the globe. The company also launched shopping in South Korea last year. It has become its second-largest market. In order to meet customer demand and requirements, the company has added Korean language support.

StormX also introduced shopping for Android and iOS and now has more than 70,000 active users per month.

During Q2 2020, StormX introduced its Rewards Program so that users can earn as much as 3.5x crypto back at every store. StormX’s STMX token has now been listed on Uniswap and KyberSwap, which marks the company’s “first step” into DeFi.