Andrew Bailey, the Governor of the Bank of England, spoke at the Brookings Institue in the US this week and he tackled a hot topic: cryptocurrencies. More specifically, Bailey spoke about the efficacy, or lack of, when using certain digital assets in payment transactions.

Bailey said that while Bitcoin may have “extrinsic value” it has no connection to money and is unsuited for the world of payments.

Stablecoins, on the other hand, may have merit, according to the Governor:

Global stablecoins seek to apply new technology, stemming from the world of crypto-assets, as well as changing some of the fundamentals of the underlying payment chain. They change not only how you pay but what you pay with – rather than a transfer of money between bank accounts, stablecoin systems transfer the asset itself – the stablecoin – from one person to another.

Stablecoins could offer some useful benefits. For example, they could further reduce frictions in payments, by potentially increasing the speed and lowering the cost of payments (particularly if global stablecoins were to be established). Stablecoins may offer increased convenience, including via integration with other technology, such as social media platforms or retail services.”

Bailey appears to be supportive of innovations in digital currency but he rightly points to a need for stablecoins to adhere to standards of operation similar to other forms of payments and transfers.

Bailey said that some stablecoins fall short in hitting this standard:

“Some stablecoin proposals do not include a legal claim for coin-holders. And some stablecoins propose backing in instruments that may have material market, credit and liquidity risk, but do not have the money protections I have outlined. While this might be acceptable for speculative investment purposes, it would not be for payments widely relied upon by households and businesses. Stablecoins need to offer coin-holders a robust claim, with supporting mechanisms and protections to ensure they can be redeemed at any time 1-to-1 into fiat currency.”

Global stablecoins must have “robust governance” and be transparent in structure. Regulators must be part of the mix if an aspiring stablecoin issuer is to be deemed worthy of achieving its mission.

As for Central Bank Digital Currency (CBDC), Bailey echoes a sentiment that has been stated by many others – that a CBDC requires careful consideration and study prior to any utilization. The Bank of England has been exploring CBDCs – along with many other jurisdictions. 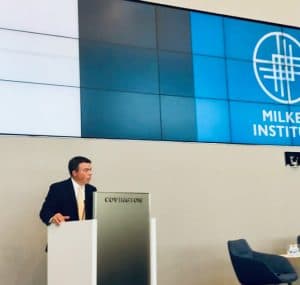 Jackson Mueller,  Director of Policy and Government Affairs at Securrency – a Regtech/Fintech that is seeking to facilitate “a new financial services infrastructure to leverage the benefits of blockchain technology,” shared the following comment after Bailey’s speech:

“There’s a particular part of Andrew Bailey’s remarks that should reverberate within regulatory agencies, the halls of policymakers, and industry offices. That is, the need for a wider debate when it comes to the future of payments and how payments innovations are going to interact and interoperate across networks and borders,” said Meuller. “For too long we have pigeonholed ourselves into looking at cryptoassets, stablecoins, CBDCs, among other forms of payment, strictly within the silos of this terminology. In essence, we’re missing the forest for the trees.”

Mueller said that what needs to be examined in much further detail and with greater emphasis is the underlying architecture that supports these and future payments innovations and how such a system can be (and are currently being) developed in a manner that is capable of responsibly managing the movement of value across disparate systems and in a way that promotes innovation, while maintaining robust regulatory standards that protect the underlying financial services ecosystem.

“What this points to is a recognition that all of these forms of value can move across common compliance and security rails without creating a monolithic network and while preserving technological optionality.”