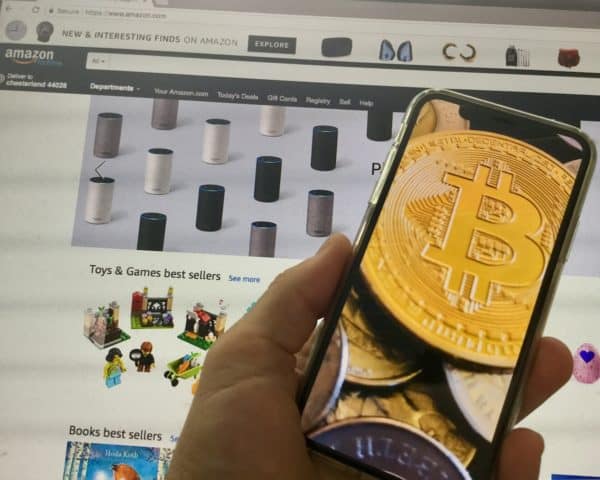 He believes that distributed ledger technology (DLT) and cryptocurrencies have created a new movement in the e-commerce industry – which will empower the merchants to compete on a whole new level.

Our discussion is below.

Daniel Dabek: The blockchain and cryptocurrencies give power to the user. People generate their own account (private key), and no longer need to store sensitive financial information such as credit card numbers or personal information on random websites when shopping online. This substantially reduces losses to fraud and hacking. There are simply too many targets for hackers when everyone has control of their own private key.

Also, cost is addressed because a centralized company must purchase and operate vast server infrastructure. This activity is extremely expensive and requires extensive expertise to set up, operate, and maintain (also, paid upfront). However, a proper public open-source blockchain network is established by both ordinary people and businesses.

Anyone in the world can download the software and turn it on. This immediately connects a new computer to the global network and it immediately begins participating in processing and ferrying transactions for users around the world. So, a large global infrastructure is possible to deploy based on demand very cheaply and efficiently.

This low cost and low commitment infrastructure leads to the effect that using the network is also cost-efficient, and that means it is accessible to more people. Imagine paying $0.0001 to list a product for sale and anyone on Earth can see it, and buy it; instead of paying $39.99 per month to Amazon where only credit card holders can purchase. Many more people are able to afford blockchain-based services than those that are centralized and deny cryptocurrency.

Crowdfund Insider: Why do we need decentralized marketplaces over the mainstream marketplaces such as Amazon and Alibaba for buying and selling goods?

How do you think these marketplaces will be able to compete against the digital commerce giants that already control a majority of the market?

Daniel Dabek: The reason that e-commerce giants control market share is due to their large fees throughout the payments processing chain. These fees act as a large governor on the ability for merchants to progress, and so the e-commerce giant is able to act faster and strongly consume the lion’s share of the market.

Introducing the blockchain and cryptocurrencies to the equation levels the playing field for merchants relative to the giants. The merchants will finally have an alternative that is highly low cost to operate and enables innovation. Merchants will no longer be limited by the platform’s policies that limit the ability for others to purchase the vendor’s inventory.

Safex democratizes the ecommerce engine by establishing it on a blockchain and enables the people of the world to participate in it openly. This has created a new movement in the industry and is on a trajectory to empower the merchants to compete on a whole new level. We believe that e-commerce will expand at the rate that is projected (>20%) per year because of the emergence of platforms like Safex.

[We think that there’s] been a platform [before] that provides instant non-repudiable payments to merchants in real-time. This means merchants can reinvest their earnings to new inventory immediately, and start to make financial decisions that were not possible before the advent of cryptocurrency and blockchain networks.

Crowdfund Insider: As a decentralized global marketplace, what advantages do you think Safex has over Amazon and its other centralized counterparts?

Daniel Dabek: The cornerstone of the Safex marketplace is the blockchain network. This is an open-source software development that anyone can download and run a node, essentially storing and serving transactions data that are recorded to the blockchain ledger. It is a low cost to operate and a large collection of these free low-cost nodes creates a big network and a strong infrastructure.

While Amazon and other centralized marketplaces need to maintain and operate vast silos of servers and data exchanges, our network is united at the start and it is our Community and the Fun of operating the network that is our infrastructure. Through this, we are able to provide the lowest cost to host and serve the marketplace data and the payments that make the world go around.

Crowdfund Insider: How do you plan to manage the buying and selling process on Safex’s e-Commerce platform when the platform is totally decentralized?

Daniel Dabek: The platform itself stores two sets of data: the financial element and arbitrary data. The blockchain takes care of ensuring that the products are hosted and that other users are able to send funds to the offer and that both parties become aware of the transaction and funds get cleared instantly on the blockchain. This incorporates exchange rate feeds [that are] updated [in a] decentralized [manner] on the blockchain via price oracles.

In addition to the financial element necessary to list an offer into the blockchain ledger, there is the extra data field that accepts any random set of data. Here is where we employ a standardized data structure that can easily be picked up and read by almost all programming languages. This extra data is where you can store images, descriptions, formatting, country restrictions, shipping methods, and any other data developers or merchants will adopt. The protocol releases with an initial version, yet it is flexible to expand its offerings to users.

Anyone with access to the Internet and computer/phones could download and set up a wallet application that interfaces with this marketplace. They can list, manage, and buy products all from one app. The hosting of the app is entirely dependent on the decentralized blockchain network for the data and interactivity.

Crowdfund Insider: What are the reasons people may want to move from buying and selling on traditional platforms to doing so on Safex? What benefits does the platform offer to its buyers and sellers?

Daniel Dabek: The network effect of blockchains is profound. Anyone on earth can communicate with at least some of the thousands of blockchain nodes in the world and start transacting. Safex leverages this by enabling direct commerce on that network. This means merchants will be able to engage customers on a global scale. Since the blockchain is globally accessible, buyers should have access to a larger catalog of products to choose from.

This will be possible since, large e-commerce platforms have hefty upfront fees, often requiring a credit card in order to start selling. Safex obliterates that major deterrent since anyone can start selling essentially by downloading a wallet application. Creating an account and selling products costs fractions of the cryptocurrency costing fractions of a cent, and there are no recurring charges to use the platform. We expect existing merchants to at least list in parallel and importantly bring a whole new crowd to the e-commerce space due to our lowest barriers to entry.

And a major point about Safex being a cryptocurrency is that payments are instant and can not be charged back. This means that vendors are able to recapitalize their business at the point of sale (funds are available from a sale immediately), rather than waiting and processing with the centralized entities that often take weeks and months before vendors can restock.

Crowdfund Insider: What has been the story of Safex so far and how do you plan to expand the platform in the future?

Daniel Dabek: Safex has established a large community of early adopters that consists of software developers, technology enthusiasts, marketers, investors, and importantly existing users of Amazon, Ebay, et al. In 2015 we established the project and released a participatory token in an auction where 99% were sold and ~150 bitcoins were collected worth $50,000.

Since then, the community has proliferated beyond 10,000 adopters as the development team assembled the code for a sovereign blockchain network and cryptocurrency with an e-commerce platform. This year after 9 months of live testing with hundreds of participants the team is ready to release the marketplace to the public.

Cryptocurrency has been used to purchase services and goods throughout its existence, though never before has the whole commerce process been vertically integrated into a decentralized protocol with proper incentives for all participants. Now, we are on a mission to equip the people of the world with a strong tool that can enable their prosperity by providing goods and services to the world marketplace on Safex.