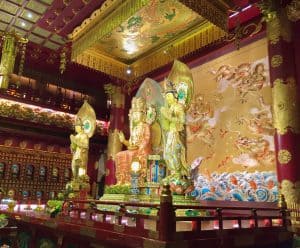 As mentioned in an update shared with CI, the deal secures SGD 4.5 million in additional capital for the firm “producing premium art collectibles for global brands such as Marvel, DC Comics, and Hasbro.”

The deal has come after last week’s announcement of Heliconia as a “new strategic investor in XM Studios.” Heliconia is an “independently-managed wholly owned subsidiary of Temasek Holdings.”

Established in 2012, Singapore-headquartered XM Studios has seen a steady increase in revenues along with “an expanding network of licensing agreements,” the update revealed. Last year, revenues had more than doubled to SGD 16.9 million from SGD 7.9 million the year prior, meanwhile, the firm also “recorded a net profit of over SGD 4.2 million in 2020.”

In order to take advantage of the vast benefits of digital securities, the offering has been tokenized on the ADDX platform, with “no parallel non-digital issuance.”

Heliconia anchored the deal with a SGD 1-million investment. Other accredited investors made contributions “on the same terms as Heliconia, in an offering that was over 1.75-times subscribed based on the company’s fundraising target.”

In order to accommodate “high demand” from investors during the subscription phase, the size of the deal was “increased from SGD 3 million to SGD 4.5 million.” The acquired capital will be used “for the expansion of XM Studios’ premium and premium mass collectibles business in new markets and the acquisition of new intellectual property licenses, as well as for general working capital purposes.”

“The new offering took the form of exchangeable notes that are redeemable for shares in XM Studios at a significant discount under specific liquidity scenarios. If the exchangeable notes are not redeemed within 18 months, the notes will mature at an interest rate of 6% per annum. Due to the efficiency gains from digital securities, ADDX was able to broaden investor access by reducing the minimum investment size to SGD 10,000, down from the SGD 1-million minimum that is typical for such investments.”

Primary subscriptions have now closed, and XM Studios tokens “are now listed on the ADDX secondary exchange, where they can be traded by all accredited investors, including those who did not subscribe in the first instance,” the announcement confirmed.

The listing of exchangeable notes of XM Studios “marks the first in a new line of equity-linked products by ADDX, expanding the suite of ADDX listings beyond funds and bonds,” the update revealed while adding that “in line with its strategy of building a multi-asset platform to meet all private market needs of investors,” ADDX will be introducing new products in 2021. They will reportedly include structured products and investments with “exposure to cryptocurrencies.”

As noted in the announcement, XM Studios is a Singapore-headquartered design studio focused on the “creation of premium collectibles.”

Among the intellectual property licenses it holds “are Marvel, Star Wars, DC Comics, and Sanrio.”

Hand-crafted and hand-painted, these collectible statues are “made with intricate attention to details such as fine zips and buckles,” the update noted. They also come with “switch out” parts to “reflect how the character would look in various settings and moods.”

Depending on complexity and size, the statue collectibles have “prices ranging from under S$1,000 to as much as SGD 6,000 each.” XM Studios makes the collectibles in collaboration with a team of international sculptors, illustrators and designers, and “distributes them via a global network of 20 key distributors.”

“XM Studios has grown from a humble shop in Singapore’s Bras Basah Complex into a global brand. We could not have done this without the consistent support of our fans and collectors over the past decade. The fundraising on ADDX was designed to allow fractional access at a minimum investment of just SGD 10,000, because we wanted to provide long-time XM Studios fans with the chance to take part in the growth of the company. The new capital also enables XM Studios to seize opportunities in the next phase of our expansion – in new markets and new segments like premium mass collectibles, allowing fans to buy their favorite collectibles at a more affordable price range.”

“XM Studios is a superhero of a company, a home-grown Singapore start-up with an expanding global footprint. Even as it grows rapidly, the firm has succeeded in turning profitable, making it an attractive investment proposition. … They started with Marvel in 2013, but did not rest on their laurels, announcing in this year alone licenses with the likes of Sanrio, Harry Potter, Looney Tunes, and The Great Gatsby, as they expand into the premium mass collectibles segment.”

“The new line of equity-linked products on ADDX offers investors a chance to diversify their portfolios through companies experiencing faster growth. Before these products are listed on ADDX, they go through a robust due diligence and listing committee process. … Furthermore, the fractional sizes enabled by digital securities empowers investors to take on just the right amount of any investment for their current portfolios.”

Established in 2017, ADDX is an integrated issuance, custody and exchange platform “for digital securities regulated by the Monetary Authority of Singapore (MAS).”

The Fintech firm is reportedly backed by the Singapore Exchange, Heliconia Capital and Japanese investors JIC Venture Growth Investments (JIC-VGI) and the Development Bank of Japan (DBJ). ADDX serves accredited corporate and individual investors in different 27 countries covering Asia Pacific, Europe, and the Americas (but not the US).