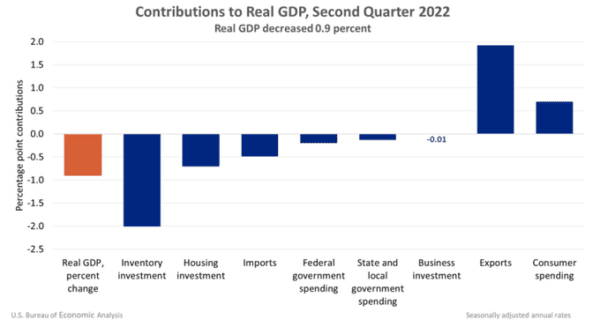 The US Economy delivered a second-quarter of GDP decline, an event that has historically determined that an economy is in recession.

The US Department of Commerce, Bureau of Economic Analysis (BEA), reported that Q2 2022 GDP declined by -0.9%. This follows a Q1 decline of -1.6%. The BEA said the “smaller decrease reflected an upturn in exports and a smaller decrease in federal government spending that were partly offset by larger declines in private inventory investment and state and local government spending, a slowdown in personal consumption expenditures (PCE), and downturns in nonresidential fixed investment and residential fixed investment. Imports decelerated.”

“Sadly, this recession was avoidable yet entirely predictable given policies and policy threats that are stoking uncertainty, depressed demand, vastly higher costs on everything, and shrinking business investment. Incredibly, through the latest ‘Build Back Manchin’ tax and spending bill, President Biden and Democrats in Congress will only supercharge the recession, making it harder for entrepreneurs to keep their businesses afloat. Not only that, the bill will vastly harm drug innovation and U.S. companies that are working hard to overcome supply chain, labor and inflationary challenges.  America’s entrepreneurs and small businesses need a massive overhaul in the direction of policy, but unfortunately, they will not be getting that from their current political leaders driving the agenda. As Einstein noted, the definition of insanity is doing the same thing over and over and expecting different results.  At this point, we can only hope and pray that the politicians pushing this treacherous agenda will wake up and change course.”

The news of a negative GDP number was preceded by statements from the White House, Council of Economic Advisors, that attempted to battle the semantics of how you define a recession. The Twitterati was out in force, of course, with one pundit noting that all past 10 recessions were defined in the same manner.

Question: Out of the past 10 times the U.S. economy has experienced two consecutive quarters of negative economic growth, how many times was a recession officially declared?