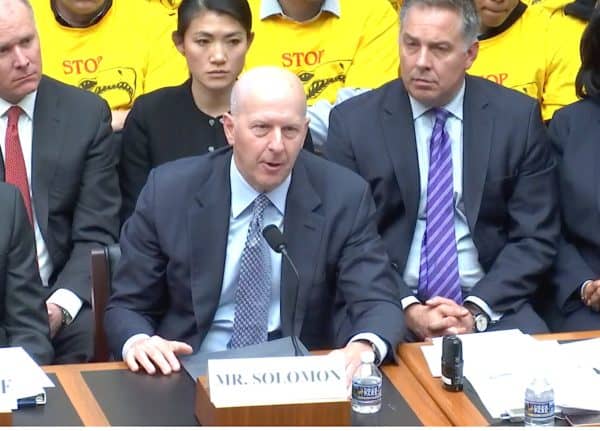 Goldman Sachs (NYSE:GS) released Q4 2022 and full-year 2022 results yesterday which have been deemed a disappointment by analysts and many investors. It has been widely stated that Goldman has not missed expectations this badly in many years. Shares quickly reflected this sentiment, sinking dramatically.

This morning David Solomon, CEO of Goldman Sachs, discussed the bank’s performance during a chat with CNBC in Davos, noting that it has been a long time since both debt and equity markets have performed so poorly – a fact that undermined his bank’s performance. “We obviously had a disappointing quarter,” said Solomon.

Solomon was optimistic about the overall economy sharing his current opinion things may improve during the latter half of the year as inflation appears to be peaking.

He also reflected on Goldman’s attempt to grow a retail business with Marcus – a segment of its business that the bank has decided to pull back on as it tried to do too much too quickly. He did say their deposit business remains healthy, adding that they are growing wealth management very nicely.

Regarding its relationship with Apple (NASDAQ::AAPL), Solomon remains bullish. The Apple Card is part of Goldman’s new Platforms Solutions division, which generated $1.5 billion in revenue during 2022, an increase of 135% over 2021. This represents a very small proportion of Goldman’s overall business activity. Solomon said that Apple did not affect its performance during Q4 and that Apple’s ecosystem is a big opportunity due to its extensive reach around the world. He mentioned specifically that Apple users are a source of deposits. While previously announced but not yet live, the Apple savings product represents an opportunity for Apple users to “take their cash and put it with Goldman Sachs.” All streamlined and automated, of course.

Has Apple been a drag on return on equity (ROE)? Yes, but the overall service and partnership are in a different stage of growth and a significant opportunity.