The first quarter of the twenty-first century has primarily been dominated by the evolution of digital currencies. It’s hardly a decade ago when Satoshi Nakamoto introduced the first cryptocurrency (bitcoin), but the popularity of the virtual currency has gone viral.

Currently, there exist more the 2000 cryptocurrencies in the marketcap, including Etherium (ETH) and Litecoin (LTC). Sometimes, there arises the need to exchange cryptocurrencies from one particular cryptocurrency to another during trading. In this article, we’re going to analyze the exchange of Litecoin to Ethereum.

At the current market prices, 1 Litecoin is equivalent to 0.33110109 Ether. However, just like other coins, both Ethereum and Litecoin are faced with price volatility. The two coins have stability range despite the fluctuation, the maximum exchange rate ever recorded for the past one year is 0.33894130, while the minimum price being 0.33103073. In general, there is a 0.3% increment and -0.22% decrement. The graph below shows fluctuation rate for the past one year regarding the consistency of the prices.

Historical Exchange Rate Graph of change in 1 Litecoin to Ethereum 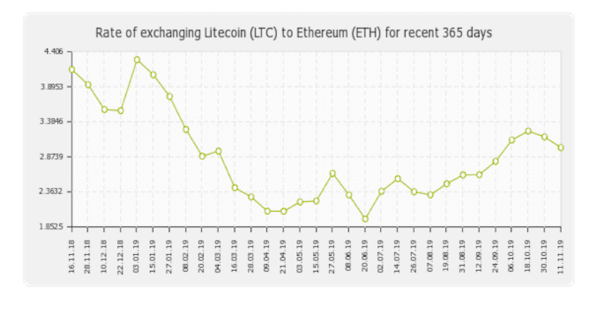 There exists a trusted exchange platform that guarantees a safe and faster conversation of lite coin to ether. An example of such a platform includes CoinSwitch that aids traders make an informed decision through analyzed trading details.

Litecoin is preferred because it uses that same concept as bitcoin development and it comes in a lite version and transact faster. On the other hand, Ethereum is a platform that fuels the development of Initial Coin Offering (ICOs). This has led to the mass adoption of Ethereum and trust as a distributed public ledger as well as a decentralized LEDGER (dApp) network capable of executing a contract that facilitates the exchanging of monetary assets once the condition is met.

As a result, the exchange of Litecoin to Ethereum withstands all sorts of limitations, including censorship, fraud, and downtime or third-party interference. Most enterprise prefers Ethereum because of its guaranteed security with zero downtime.

CoinSwitch has stood the test of time and distinguished itself as unique and the best world’s best Litecoin to Ethereum exchange platform. The site is light, faster, and secure that can support up to 300 virtual coins and 45 cryptocurrency pairs such as Litecoin to Ethereum conversions and vice versa.

CoinSwitch has a user-friendly interface, which is among the salient features that make it stand out among others. It is built with the best algorithm that helps users to receive real-time information about user’s daily trading activities giving the power to control virtual currencies.

Besides ones a user converts LTC to ETH, they receive exact a mouth of ether that is then transferred into the owner’s digital wallet directly.

Already enthusiastic cryptographic developers have designed a number of websites that exchange of Litecoin to bitcoin takes place.  Despite them doing sample faction, there are slight differences that make some websites stand out from others. For instance, some websites are faster, cost-effective user-friendly and overall security.

The list below contains the most reliable exchangers depending on overtime user rating and level of convenience. To carry out an exchange, you can always check on the list for a secure transaction.

Why is CoinSwitch the best place to trade LTC to ETH?

Regardless of what a user needs, Coinswitch is able to provide, with CoinSwitch one gets the best exchanges where they can track money in real-time. Also, there is dedicated customer support that instantly resolves one’s queries regarding the exchange program.

Coinswitch is uniquely designed to allows its users to check multiple of live exchanges between LTC to ETH across the major exchanges, including Binance, Coinbase, Changelly, KuCoin, HitBTC, OKEYx  Huobi and has the favorable conversion rates that in turn gives an indicative return.

The table below shows the conversion equivalent amount of Etherum per one Lite coins.