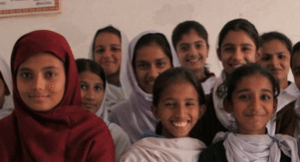 So there it was – my idea neatly written out on a blank piece of paper in front of me. It seemed simple enough at the time; to travel over to my native country Pakistan and run a series of free filmmaking workshops for schoolchildren. As I began to plan things out, look into the logistics and make session plans, I realized this was no easy feat and it definitely needed much more funding than I had previously envisaged. What should I do?

Sponsorcraft is what I did! As a filmmaker, it’s pretty normal to have to scavenge around for funding and write countless funding bids for film ideas and scripts, but as I knew this was a project that was for a community; for other people, I thought it deserved to have the support and involvement of people who would be as passionate as I am about it.

I had never fundraised or gone through any crowd funding before, and was a little scared about it to be honest. However, I found the website and layout of Sponsorcraft easy and appealing enough to sign up for an account and give it a go. I wrote out an action plan, made detailed plans of what it was that I wanted to do, achieve and what the donations would be used for. I felt it was extremely important to be clear about that – most people would want to know how they are contributing and what difference their contribution will make. In this case, every single penny was important and every person would be making a massive difference.

Read more at the Sponsorcraft Blog