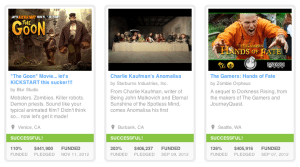 No industry is changing as rapidly as the film industry, and the burst of creativity engendered by crowdfunding is helping to accelerate that change. The film industry is still largely dominated by the large studios, the agents and of course the “talent,” but something incredible is taking place with the advent of crowdfunding.

Recently reviewing the number of films up for crowdfunding on Indiegogo showed 931 pages of potential projects (6 to a page).  Some were funded and some were not.  We recently authored an article featuring the success of Seed&Spark and their unique and dynamic approach to crowdfunding independent films.  Out of the gate the platform green lighted multiple projects:  7 films in 60 days. 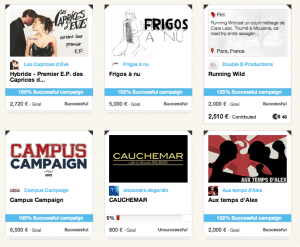 There are many other platforms not mentioned above that are generating funding for independent films.  Many would never see the light of a projector except for the phenomena of crowdfunding.

The American Motion Picture and Television Industry has reported that film supported 2.1 million jobs in 2010.  Nearly $143 Billion in total wages.  Over $42 Billion of those wages are estimated to be direct.  This is clearly an important industry for the United States with over $10 Billion in domestic gross for 2012.

And now crowdfunding enters.  Crowdfunding leader Kickstarter announced their year end funding results for 2012 last month.  Film & Video generated over $100 Million in pledges over the past three years.  This amount may seem small in contrast to the total industry statistics above but Kickstarter only opened their doors in 2009.

There is a revolution going on in the film industry now.  It is only beginning.  The incredible Kickstarter results from their crowdfunded entrants at Sundance is just another indicator of the disruption which is occurring in this industry.

It is no exaggeration to declare that crowdfunding has engendered the beginning of a creative film renaissance,  enabled by these many crowdfunding platforms.

Films Funded by Kickstarter at Sundance