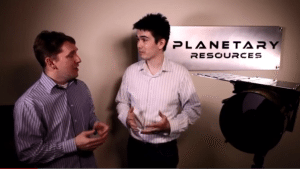 The ARKYD space telescope has surpassed their initial goal of  $1,000,000 crowdfunded on Kickstarter.  This occurred after the organizers had announced stretch goals with a final target of $2,000,000 raised.  The crowdfunding campaign still has 9 days left to go so raising another $1 Million, while a challenging task, is still doable.

Chris Lewicki, from Planetary Resources, announced on their campaign update section they had achieved this success; 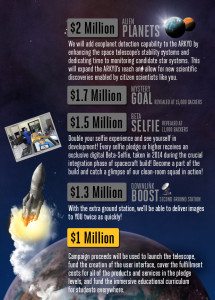 Thanks to you, we WILL build ARKYD – The first publicly accessible space telescope!

From Peoria, Illinois to Xinhui, China, from Givatayim, Israel, to Leicester, Great Britain, it is YOUR space observatory. But we’re not satisfied, and we know you’re not either.

Because there are alien worlds to be found.

And countless communities across the globe to connect to space for the first time in history.

But just for a moment, join in our celebration.

Over 12,800 supporters have backed this campaign with donations ranging from $1 up to $10,000 – which captured 24 supporters for a significant portion of the funds raised.

The “first publicly available telescope” presently has an estimated date of delivery is currently listed as August 15th, 2015.