MogoTXT has taken issue with a backer comment on the Kickstarter campaign page for Gridiron Thunder.

We first reported on Gridiron Thunder earlier this week. The game is taking part in Ouya’s #FreeTheGames fund, which promises to match funding for Ouya-exclusive games crowdfunding on Kickstarter. Some odd early backers of this campaign and another participating in the fund have put the conspiracy theorists in the crowd on high alert. (For more on that story check out Wednesday’s article.)

Now a backer has made some accusations based on a pending legal matter surrounding MogoTXT, and MogoTXT has taken issue with the comment in the form of a threat of legal action. (Note: order of comments reversed for clarity) 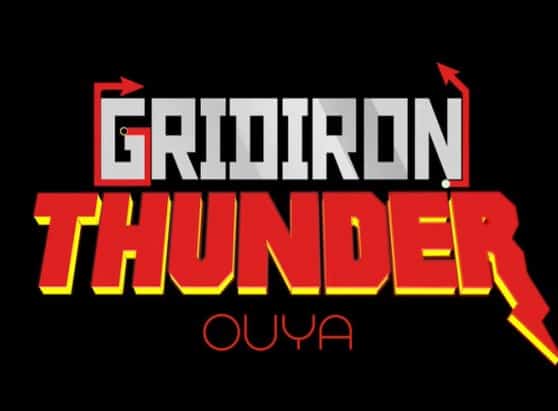 Note: the San Francisco Superior Court case referenced by the backer can be seen by clicking here and entering “528884”

So, is this just good prevent defense or unnecessary roughing? One backer has already chimed in…

Threatening legal action over Kickstarter? That’s crazy. Like seriously crazy. Declaring someone has a say to publicly reveal themselves is so over the top and really vicious. 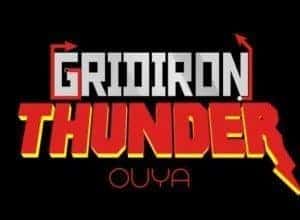 I reached out to Andrew Won, CEO of MogoTXT, to ask about some of the accusations regarding mysterious backers of his company’s campaign.

“We have deep roots in Silicon Valley and longstanding ties to fellow tech entrepreneurs in the San Francisco Bay Area and beyond,” Won told Crowdfund Insider. ” In my case, I practiced law in Silicon Valley for over 20 years before taking the reins at MogoTXT and have a lot of friends in the valley.  Likewise, many of our staff worked for many years at leading game companies like EA, Kixeye and Glu, and also have ties throughout the valley.  Because we are focused on sports games and sports social media, we also have a lot of friends in the professional sports world. ”

“Having generous supporters does not violate a KickStarter or Ouya rule.”

He also expressed dismay at the fact that so much attention has been placed on the politics of the campaign and not, as Won calls it, the “fantastic new football game” that MogoTXT plans to bring to Ouya.

We’ve seen the controversy around the games and we’d love if you would let the community know a couple of things:

UPDATE: This is beginning to feel all Susan Wilson-ish. There has been another less-than-endearing exchange between a backer and a representative from MogoTXT.

UPDATE 2: Andrew Won has reached out to Crowdfund Insider in hopes of clarifying his situation and correcting our earlier reports. The meat of his response is below…

Let me give you the true facts here and I really hope that you will do the right thing and correct your story because it is inaccurate, misleading and very damaging to me, my company and my company’s currently pending KickStarter campaign for what it currently suggests.

I do not know the law firm that is identified as Capstone Law APC.  I have never been a part of this law firm which apparently is based in Los Angeles.  I do not know a single lawyer there or what kind of law they practice.  Put simply, I am not a part of the legal proceeding that you referenced in any way, shape or form.

From 1999 until 2009, I helped found and operate a different law firm called Capstone Law Group LLP which was based in Silicon Valley.  My former law partner and I dissolved this firm in 2009 once I decided to take the reins of MogoTXT.  During its existence, Capstone Law Group LLP never had a single ethical issue of any kind.

To be clear, there is no connection whatsoever between the firm I helped found and operate for 10 years in Northern California (Capstone Law Group LLP) and the other law firm based somewhere in Los Angeles (Capstone Law APC) that is the subject of a law suit that I am not familiar with or involved with in any way.  There is no connection whatsoever.

And if you think I over-reacted to the post by “Tyler Durden” that you cited in your article, you should know that the accusations are very serious.  Money laundering is a felony.  And, as explained above, I have never been associated with Capstone Law APC or involved in any ethical issue whatsoever.  And it is incredibly unfair for someone to post something that brings my ethics into question and impugns my professional reputation when they know what they are posting is not true.

If you doubt me, please contact the Capstone Law APC law firm in Los Angeles and ask them if they know me and if I have ever been a part of this firm.

I should also point out that “Tyler Durden” is not really a backer of our company contrary to what the title of your story suggests. “Tyler Durden” made a donation for a few minutes in order to be able to make the defamatory post on our KickStarter comments section that you cited and he then immediately withdrew his donation and disappeared.We were able to discern the true identity of “Tyler Durden.”  While I will not reveal his real name right now (I will be more fair with him than he was with me), I can tell you that he knew that the information he was posting was inaccurate and that he tried to blame the post on one of his former employees by stating that “He possibly might have access to my logins etc,.” 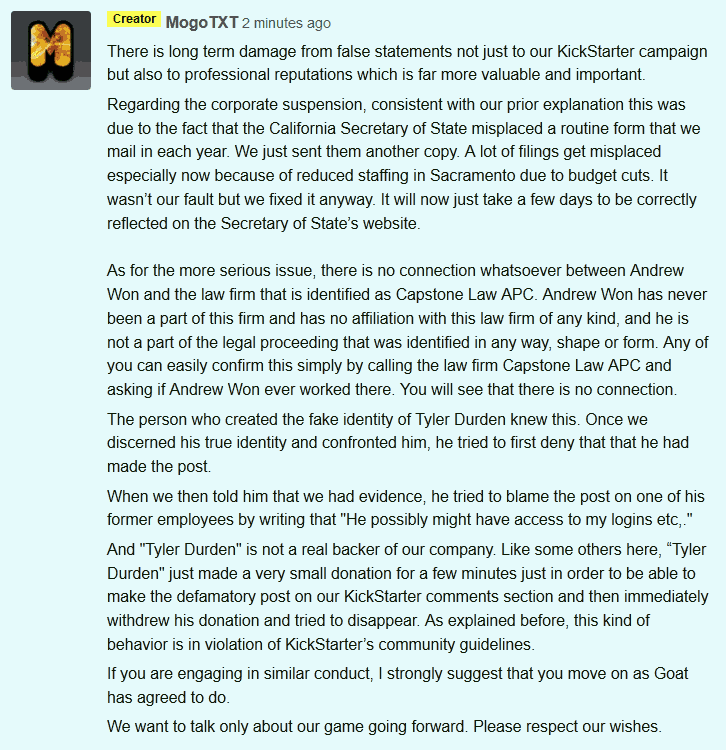