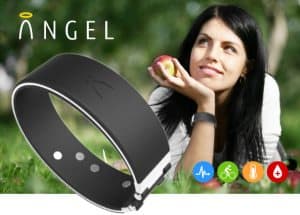 In September we reported on the Angel Health Sensor after the Tel Aviv-based Seraphim Sense raised $20,000 in a day on Indiegogo. The campaign has closed on Indiegogo, having raised $324, 521 on a goal of just $100,000.

Angel is different in that it tracks multiple vital signs including; Heart Rate, Skin Temperature, Blood Oxygen and Physical Activity.  Many similar products already on the market only track physical activity.  On top of the multiple metrics there is an SDK  available which allows any health app developer the ability to integrate their app into the device.  All other health sensors on the market today have been created to integrate with a single, proprietary application.

The co-founder and CEO of Angel, Eugene Jorov stated, “We wanted to create the right hardware for the future of health. Right now digital health solutions are started from scratch by building a sensor. Most devices end up with very limited functionality. Whatever the product, its users are typically locked into using the only app that comes with it. Health is just too important to remain closed to mass innovation and we believe in an open future for the health eco-system.”