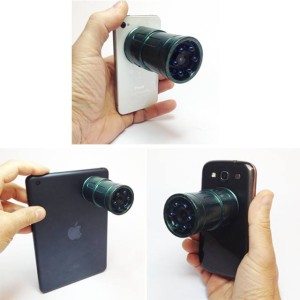 Crowdfunding on Kickstarter from the United Kingdom is the Snooperscope.  This hardware gives you true night vision for your iOS (or Android) device meaning your iPhone can now be the coolest stealth camera ever.

With over a week to go in the crowdfunding campaign the Snooperscope has raised almost £35,000 on a £40,000 goal. 736 backers have hopped onto this project with the majority scooping up rewards levels that promise the backer receipt of one these inventions. 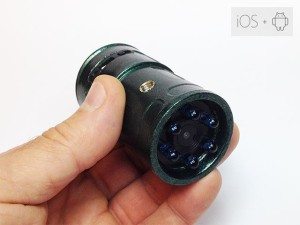 The Snooperscope is a wireless device that works just like other night vision goggles. It illuminates using infared radiation and converts this light into a visual image.  The hardware pairs with your smartphone using WiFi and integrates with a forthcoming app allowing you to stream images to the screen of your phone where you can shoot still images or shoot video.   The Snooperscope has its own battery which claims up to 4 hours of active use.

This is not the first project for PSY.  This past August they attempted to crowd fund JUKE – which turned your smartphone into a wireless singing device.  The project closed without being funded apparently due an intellectual property dispute.  It appears their second go at crowdfunding hardware is experiencing a better result.

All the early rewards levels are long gone but if interested you can still sign up to back the project and receive your own Night Vision device for only £43.  Estimated delivery is May 2014.

So if you ever wanted to be able to see in the dark… here is your chance..