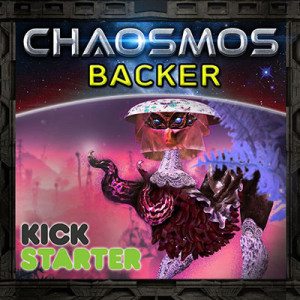 Board game Chaosmos, developed by independent publisher Mirror Box Games, launched their crowdfunding campaign January 2nd and made $30,000 (75% of its goal) in the first three days. The target of raising $40,000 on Kickstarter has almost been doubled as over 1000 backers jumped in to support the project.

Mirror Box Games has now announced a new modular board upgrade as a stretch goal. This board can configured to the classic galaxy set up, or customized to millions of new configurations that allows for a unique board set up every time. When combined with optional planet effects tokens, the board layout allows for infinite replay ability.  The project creators have effectively used social media to build the buzz around the game setting targets for backers to share / email / follow etc. at certain watermarks which are incentivized.

The game category, which includes both digital / video games and traditional games, is the single largest category on the platform. Over $181 million has successfully been funded for game projects since Kickstarter was launched.  The 2nd largest category is film & video. 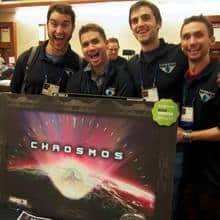 Chaosmos first debuted at GAMA Trade Show in March 2013, and the creators have run extensive testing during Gen Con. Over 200 new players demoed the game at Gen Con and Board Game Geek Con.

Chaosmos is a space-themed board game set in a collapsing universe, where players assume the roles of aliens on the hunt for a rare artifact that will save their race from impending doom.  Chaosmos is an open-world game featuring several innovative mechanics, including area-specific envelopes of cards, a closed card ecosystem without a draw or draft deck, and a time travel mechanic that can alter the ending. The game also has a unique victory goal similar to a cloak-and-dagger version of Capture the Flag. Despite the chaotic name, Chaosmos is a deep strategic game with a complexity of possibilities and a large amount of choices and a high amount of player interaction.