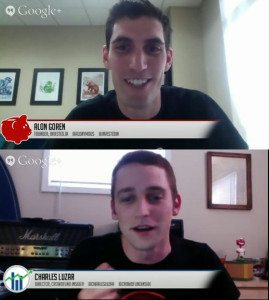 When Invested.in co-founder Alon Goren approached me a while back with an idea to launch a periodic live show about crowdfunding, I was really excited about it. Now I can announce that we’ve completed episode one. We’re calling it Inside Crowdfunding, and we’ll be holding a new episode live every Monday at 11 AM Pacific, 2 PM Eastern at insidecrowdfunding.tv. In addition, we’ll be discussing the show on Twitter with the hashtag #insidecrowd.

So why are we doing this? Alon and I would both slot under the “young entrepreneur” umbrella. In short, we aren’t lawyers. We’re technologists, and we think we can bring a unique spin to the crowdfunding space.

The world of equity crowdfunding is taking two very distinct, different worlds – securities and Internet technology – and smashing them together to make this new, potentially amazing thing. At the same time, there is already a well-established, multi-billion-dollar donation-based crowdfunding industry, and there’s a robust peer-to-peer lending industry. At the risk of speaking for Alon, we both feel that one half of that world garners plenty of coverage and conversation (the securities side) and there are people out there that produce video content for the ever-serious among us.

We’re going to take a different approach. We’ll keep it loose. There may be a curse word here and there. We may talk about Flappy Bird or Bitcoin or Reddit alongside subjects like Rule 506(c), the JOBS Act and the Seed Enterprise Investment Scheme. In my opinion, this format will more adequately capture what is taking place in this crazy crowdfunding industry. Those talking strictly about securities are missing half the story. We’ll try not to.

As for the format, we’re going to try to have a great guest every week. We’ll try and keep the guests varied, too… issuers, project creators, venture capitalists and angel investors, platform representatives, lawyers, pundits and more. We’ll start each week with a short interview, hit on a few of the big recent crowdfunding stories and wrap up by answering questions from the audience. (Yes, this is interactive!) If you can’t make it, don’t worry… the videos go straight to YouTube once we’re done and we’re working on turning it into a podcast as well.

Of course, the format may change. Everything may change. We live in the startup world and we’re used to being agile. We’ll monitor and augment the format to fit the show as we go. (We haven’t even made a logo yet, but we’re working on it!)

Having said that, if you’re interested in being a guest on the show get a hold of myself or Alon. We aren’t hard to find. For those interested in watching, tune in every week live so you can participate in real-time and let us know what questions you want answered.

Now, watch Episode One with Josef Holm from Tubestart HERE