Enjoying the success of its first crowdfunding campaign on LetsVenture, the Bangalore-based data analytics startup Frrole announced it received $245,000 from a group of investors that included Google India’s managing director Rajan Anandan, Eka Software Solution founder Manav Garg and tech Evangelist Sharad Sharma. According to co-founder and chief executive Amarprett Kallkat, Frrole will use the funds to build its team.

He stated, “We will be using the proceeds to put a team in place, since it’s been just the three co-founders so far. We are looking to add at least another three or four people, as we look to build the business in the next 12 months.”

Although Mr. Kalkat refused to confirm the exact stake held by the investors, it  is believed that each will have about 20%. Frrole’s main roles includes counting a number of India’s top media organizations among its clientele, offers Twitter-based data analytics, mainly time and location-focused insights for its customers.

Mr. Kalkat also noted the stateup, which has already broken even, is targeting revenue between $1 million and $2 million in the current financial year. “At this point, we are India-focused, but we are looking to move into different geographies as well. We are looking at the retail and financial services segments. We may look beyond Twitter data, as we continue to grow and expand our offerings.”

He also noted the company is one in a handful of companies that is considered an endorsed partner with Twitter. “We are track partners of Twitter, which allows us to have significant access to its data.”

Frrole’s Social Intelligence Platform today analyzes almost half a billion data units every month.  The data captured is used to derive insights to create solutions for brands, media and entertainment verticals. The company works to answer “fuzzy questions” in contrast to most traditional analytical approaches. Frrole charges approximately $100 per month per data stream and analyzes tens of millions of tweets every single day. 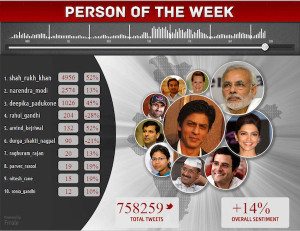 If Frrole is successful it will be considered the second company to have access to Twitter’s application programming interface (API).  An example of their service is the “person of the week” used by a leading Indian news channel to aid in tracking who is the talk of the nation by the hour.

The LetsVenture platform was launched in 2013 by three founders, Shanti Mohan, Manish Singhal and Sanjay Jha who simply wanted to make fundraising easy for Indian startups.