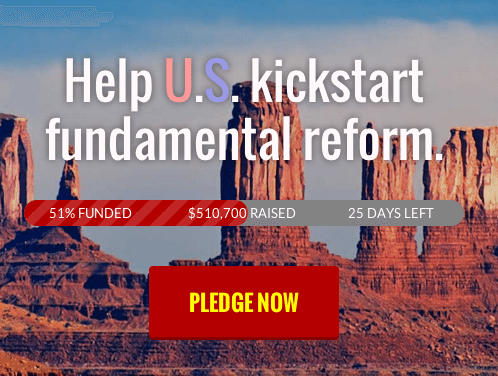 Based on the fact that government has failed us, the MayDay PAC wants to “Kickstart” a Super Pac to fix our democracy.  Regardless of whether you sit on the right or the left – most people can agree that our government today is very broken.  Partisan politics, entrenched special interests and decision driven by political expediency propel legislation.  Not common sense.  MayOne is the initiative to create a “citizens’ funded and crowdsourced super Pac to end all super Pacs” and it appears they have a good start.

For their initial self-crowdfunding campaign the organizers are seeking to raise $1 million.  As of today they have raised over $500,000 buttressed by the commitment that 100% of funds raised will go to their initial goals – and contributors will only be charged if they hit the $1 million mark.  MayDay has also pledged to match the million dollar contribution.  Same if they happen to hit the $5 million amount. Contributors may choose to target funds to only support candidates that are Republican or Democrat.

Funds raised for 2014 will go towards 5 congressional campaigns.  Based off that experience the intent is to broaden the approach during the next cycle in 2016. Some of the desired reforms are posted on Reform.To – but these may change.  The fundamental reform is to alter the way campaigns are funded today.  They want to spread the influence to the widest number of citizens possible.

With 25 days left in the funding effort MayOne seems to have pretty good momentum to hit the target. There certainly are enough people in the US that are frustrated with today’s political class and the political process.

The organization has a pretty impressive board led by Lawrence Lessig who is a Professor of Law and Leadership at Harvard.