Mayday PAC, a campaign to take back the broken political system that has frustrated the populace of the “most powerful country in the world” hurdled past the $5 million fundraising target that had a deadline of the 4th of July.  Just a few days prior to the campaign end the amount raised was far short of the objective but in the final hours by both large and small contributors the $5 million objective was beaten.  Today the campaign page shows $7,274,283 raised from 52,064 contributors with contributions still coming in.

Initially an earlier goal was set on the Mayday PAC campaign of raising $1 million.  This amount was easily attained and the second tier of crowdfunding was set into motion.   The funds raised also include a matching commitment from the campaign organizers.

Multiple high-profile names lent their support to the cause including Steve Wozniak.  The Mayday PAC was the creation of Harvard Law Professor Lawrence Lessig along with multiple other well known, bi-partisan names.  The plan is to target 5 congressional districts in 2014 where the Mayday PAC funds may be directed to influence the outcome.  The experience gained from these initial campaigns will sculpt the approach the following cycle in an attempt to to get the organizers

to 218 votes in the House, and 60 votes in the United States Senate.  Essentially they are “using big money, collected from many, to fight big money collected from the few”.  Candidates supported by the Mayday PAC are expected to support reforms posted on reform.to.  The site is open to additional suggestions.

While there is sufficient discontent with the degree of incompetence, petty political posturing and catering to special interests endured by the population it remains unclear if Mayday PAC organizers can propose reforms acceptable 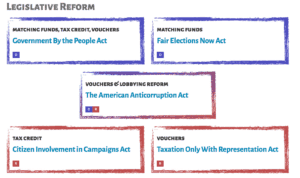 to a broad based group of people in a highly fragmented political culture.  With 122 days left until the next election day Lessig and his supporters have much to do.  A statement on the Mayday PAC page declares; “The reform we support will eliminate the conflict of interest between Congress’s duty to serve the people and incentive to serve the funders by making the citizens the funders.” Now we just need to see some actual results.