North Carolina is one of the states on the list where legislation is in process to legalize investment crowdfunding.  The states Senate Commerce Committee approved the equity crowdfunding bill earlier this month apparently putting it on track for final approval.  At the time bill sponsor Representative Tom Murray stated their bill was based off of the same model used in many other states.

But according to a report in the Triangle Business Journal, there is some controversy surrounding the erstwhile legislation.

According to the report;

“While in the Senate, the measure was lumped into a bill that would cap the sales tax. For most counties, all but six, the new bill would actually help local governments raise taxes for transportation projects, rates up to 2.5 percent. And, in places that have a local sales tax of 2.75 percent such as Durham and Orange counties, the rate would be grandfathered in.”

“But in large urban counties, counties such as Wake and Mecklenburg, there’s already the authority to referendum voters to raise taxes up to 2.75 percent. Should the bill pass, they’d have to adhere to the new limit, and critics worry about how that might impact future transit fundraises, such as for the Triangle’s often-talked-about light rail.”

With crowdfunding dumped into the sales tax legislation this puts passage at greater risk.  The bill is before the House Finance Committee today who can pass it onward or send it back.  Of course sending it back could cause further delay in legislation that is expected to assist the entrepreneurial class in the state of North Carolina. With small business being widely accepted as the engine of economic growth and thus tax revenues it would be 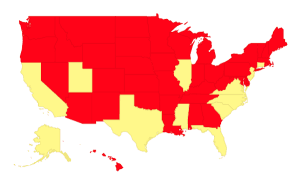 surprising if the state, known for its business friendly environment, did not find a way to keep it moving forward.

Currently there are 11 states that are in the process of legalizing investment crowdfunding.  These states hope to join the 12 that have already passed their own intrastate crowdfunding law.