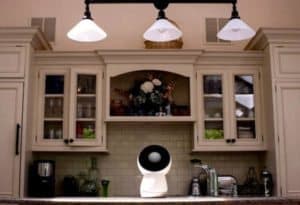 Kayla Tausche decided to do a brief report on crowdfunding and she pulled in the hot home robot Jibo and HD home monitoring system Blink.  Kayla notes that more and more makers are going for funding “$25 at a time” instead of straight to VC capital. This is part of the CNBC Tech Crowd series and there is some voting going on.  Not quite certain what for though. Jibo is kind of a robotic home valet that handles tasks in a personable fashion.  Another step in the direction of building home help instead of hiring it out. Blink is an “ultra affordable” home security device that captures HD video of your errant pets, gremlins or whomever may be cruising around your household for better or worse.

Well I think both are pretty cool products so that is my vote.

Jibo has hurdled the $1 million mark putting it in the top tiers of funding campaigns on Indiegogo.  We just received a note the campaign has added a new referral perk as they push onward hoping to grab the number one spot on Indiegogo.    Blink is now over $350,000 and has 35 days to go on its Kickstarter campaign so it has plenty of legs.