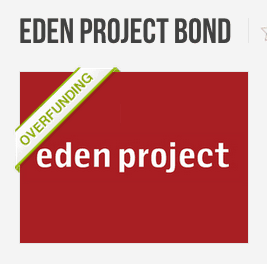 The Eden Project mini-bond crowdfunding campaign launched earlier today seeking to raise a minimum amount of £1 million. That number was easily supras as investors rushed to back the non profit, indoor rainforest.

At last look, the Eden Project had raised nearly £1.2 million from over 210 investors.  No additional information available at this time.  Crowdcube has listed two mini-bond offerings prior to Eden with the River Cottage raising £1 million in under 36 hours.  The Chilango “Burrito Bond”, the first ever mini-bond offer on Crowdcube, successfully funded as well but took longer to sell.  With the current velocity of the Eden Project offer it would not be surprising for it to close within the first day.

Don’t miss out on the Eden Project Bond. We’re near the £1.5m max target! http://t.co/3vR8CBSnUW#Ad#CapitalAtRiskpic.twitter.com/cgEOJz8dzy

Update:  Well that was fast.  Eden Project fully funds in just 20 hours.  According to Crowdcube, 355 investors rushed to invest in the worlds largest indoor rainforest.  This is the 3rd mini-bond offer on Crowdcube and certainly a record raise for the debt crowdfunding offer.  Bondholders will receive 6% interest during the next 4 years and then receive a lump sum payment for the principle.  Average investment per person was just over £4000.