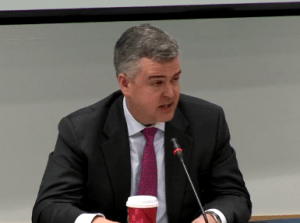 Earlier today at the offices of the SEC the Advisory Committee on Small & Emerging Companies held their first meeting in quite some time.  The appointed pro-bono group is convened at the invitation of SEC Chair Mary Jo White.

This diverse gathering of professionals is tasked to advise the Commission on the very important issues that impact Small Business.  As we now accept today, small business is the economic engine of growth and job creation for the United States.

Today the topic of discussion was the definition of an “Accredited Investor”.  These affluent individuals posses the anointed right to invest in certain private placements which are deemed risky and henceforth denied to the vast majority of the US population. Commissioner Gallagher is on the record stating he believes the definition is a low priority for the Commission, as well as for the assembled group.

“I still do not believe that we need to be spending our time “protecting” millionaires. We have Regulation A+ to finish, Venture Exchanges to create, Crowdfunding to fix, disclosures to scale—the list goes on and on. So by way of priority, this, at least to me, is near the bottom. Somewhere right above the pay ratio disclosure.”

While this publication will concur there are many other issues of pressing importance at the commission, including remaining items such as RegA+ as he mentions, we do believe the definition of an Accredited Investor is something that should be addressed.

Entities leveraging Regulation D private placements stands at around $1 trillion annually – far larger than the IPO market today.  As the regulatory pile for IPOs has grown for companies raising capital more have chosen the private path, versus the public route, making a common sense decision.  Simultaneously a growing separation of wealth creation has formed in our nation. Excluding over 90% of this nation’s population from investing in these assets, based only on bank balances, is simply wrong and has disenfranchised a wide swath of society.

Acknowledgment of risk, and assertion of investment knowledge, should be sufficient to allow anyone into the vaunted realms now only inhabited by the very rich.  Regulatory financial segregation, such as it stands today, should be called out for what it is – and fixed. Opponents may claim there is a devil in the details and a hard line based on economics justly serves most needs. But the question lingers; is this the proper domain of the federal government?

Commissioner Gallagher’s remarks are published below in its entirety.

To borrow the opening words of my alma mater’s fight song, “it’s been so long since last we met.” At a time of critical importance to small business capital formation with our implementation of the JOBS Act, it’s unfortunate that the last meeting of this body (or, to be precise, its predecessor), was in September 2013. I applaud Chair White for getting this meeting on the calendar for 2014, and I’ll be glad to see more regular meetings in 2015. This group’s work is very important and we do well to solicit, receive, and heed its advice.

Of course, today’s meeting is set to discuss that old chestnut, the accredited investor definition. After shocking the attendees at the Small Business Forum last month with my views on this topic, it should come as no surprise to those of you who followed that discussion that those views haven’t changed in the last few weeks: I still do not believe that we need to be spending our time “protecting” millionaires. We have Regulation A+ to finish, Venture Exchanges to create, Crowdfunding to fix, disclosures to scale—the list goes on and on. So by way of priority, this, at least to me, is near the bottom. Somewhere right above the pay ratio disclosure.

Nonetheless, there was one critique of my position that I take to heart: am I refusing to consider a potential expansion of the pool of accredited investors to learned professionals and others who have the education or skills such that they, too, might be able to fend for themselves in the markets? “Refusing” is a strong word—let’s just say I’m extraordinarily skeptical.

I worry about getting the government more deeply involved in defining who is sophisticated and who is not. Net asset and income tests are a very hands-off, unobtrusive, and value-neutral way for the government to define who is accredited. Having the SEC place its imprimatur on certain forms of education or training, and not others, is a dangerous path. Do we accept FINRA or CFA exams? Do we administer our own? I have a better test: real-world experience. If a learned professional has investment aptitude, then what prevents him or her from prudently building an investment portfolio in the public markets sufficient to pass our asset test, as a ticket into the private markets? This operates both as proof of knowledge and skill in investing, and also as a buffer against risk of loss in the private markets.

Moreover, I am simply incredulous that an expansion of the categories of persons deemed accredited can be achieved without compromising on the asset and net income test. It is much more likely that there would need to be a bargain, which would be somewhat more Faustian in nature. This seemed to me to be the clear import of the SEC’s Investor Advisory Committee recommendation from earlier this year.

For example, the asset test could be raised to an inflation-adjusted $2.5 million. But I am more concerned about the effect of cutting those individuals out of the market than I am eager to try some new combination of rules that might loop some different subset of people in. Just on its face—excluding a successful business person with $1.5 million in assets, in order to include a first-year lawyer with $150,000 in student loan debt—this trade-off doesn’t seem to make sense.

Or, as some have suggested, we could tier the asset test and tie it to investment limitations, so an individual with barely over $1 million in assets could only invest 10% of their wealth; as wealth increased, so would the percentage. While such an approach made sense in the limited context of crowdfunding—where small investments across a number of different companies is at the heart of that approach to capital-raising—importing that approach to private investments in general goes back to my first concern about the proper role of government. Here, it would put the government squarely in the position of dictating portfolio theory to millionaires. It’s the nanny state at its worst.

So if we could change the definition of accredited investor by a means that does not result in a more intrusive role for government, or involve any cut-back in the number of accredited investors or quantity of investible assets today, I’d be open to having the debate. But so far, I have seen no indication that would be the case, and so I believe we should spend our limited bandwidth focusing on more critical matters.

In sum, what we have by way of the accredited investor definition today is good enough. It’s not perfect, but it’s also not broken. So I hope you have a good discussion today, but I also hope we can turn to more productive issues in the future.