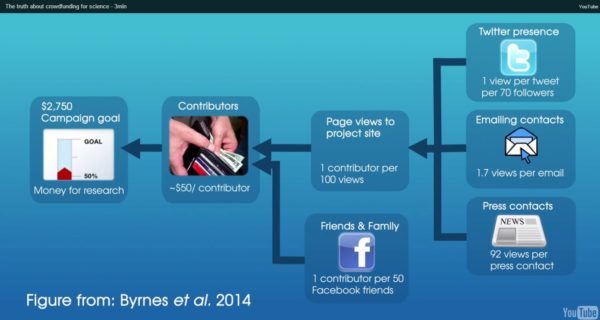 Forget the hype. A team of hard-data scientists – including at least one who is an expert in studying the formation of ecosystems – from UC Santa Barbara have released an important piece of hard academic research – which explodes the hype and myths built up by popular reporting and legends to reveal that crowdfunding is both sustainable and more powerful than the myths suggest.
We’ve no connection with this team but it fully supports what we’ve been saying – to quote from their abstract: 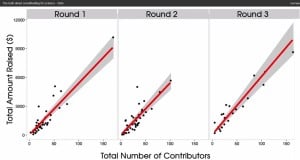 They map this out and explain that the popular myth behind most news stories that the crowdfunding narrative is;
…and why it’s wrong. Then they go on to prove it experimentally and from the data. A truly impressive effort.
They ran and analysed 160 crowdfunds concluding that crowdfunding is a marathon, not a sprint, and that the key is putting a lot of hard work into generating and building engagement. They have then ;
Scientists are often criticised or dismissed for consuming a huge amount of time and money for telling us stuff we already knew. Those most deeply involved in the field did know much of this stuff, it’s true, but what is invaluable is that this team have done great research which confirms this and throws new light on it – and done it in a way that that is highly approachable.
Given that this was a project associated with #SciFund Challenge who’s mission is to help “shrink the gap between science and society” I think this is a great example of just that – as well as a great service to crowdfunding, science and society.
You can see their video – which has all the links to the articles and research here.

Barry James is the co-founder of TheCrowdfundingCentre and the Social Foundation. Founded in 2012, the organization was created to further research, education and policy initiatives into the new, post-crash economy and “Crowdnomics”. James also created “Crowdfunding: Deep Impact”, the UK’s first national conference held in February 2013 which led to the influential Westminister Crowdfunding Forum. James is a frequent speaker on crowdfunding, entrepreneurship and innovation.
Sponsored Links by DQ Promote