Setting out to save one of Los Angeles’ Chinatown restaurants, co-owner of Starry Kitchen Nguyen Tran has announced that he and his wife, Thi Tran, are launching a crowdfunding campaign on Kickstarter to continuing the restaurants growth. 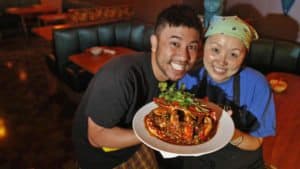 According to LA Times, Starry Kitchen is known for its menu along with its reserve-only Singaporean Chile crab. A recent review from Times critic Jonathan Gold revealed that the restaurant is even capable of breaking hearts when it runs out of its signature crab during busy days.

Tran and his wife are planning to use the funds to leave the Grand Star Jazz Club in Chinatown, where Starry Kitchen pops up every Wednesday and Saturday evening. The couple hopes to find a place of their own. Although he has searched for traditional investors for years, Tran revealed that plans have always fallen through. He remarks a fan of the restaurant gave him the idea for the Kickstarter campaign.

Tran explained, “This is our go big or go home moment. I’ve heard about [Kickstarter] for years now, and we’re drawing the line and just saying, ‘we’re going to go big or not do it at all.”

While he is excited about launching the campaign, Tran admits he has had some doubts to whether or not his restaurant will walk away with the $500,000 funds. “Kickstarter is scared for me because if we get this, it will be unprecedented.” 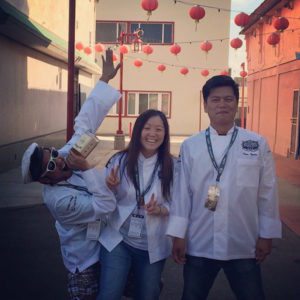 Also noting that the restaurant is struggling a little bit, Tran shared, “We’re in the hole, not for a lot of money, but we need to get out of it. And for us to move forward, we need to do it right.”

In regards to what will happen to the restaurant if the campaign falls through, Tran stated that the restaurant will close up shop all together. “There is no other plan. If this doesn’t worth, we’re shutting it all down. Not because we’re mad or sad. We’re happy with what we’ve accomplished, but we need to just go forward and be happy.”

Those who help fund the project will receive various rewards, including a “sexy” calendar of Tran and his food, along with contemplated hand-delivering packs of beer. Tran also mentioned that if a backer gives $10,000 he will get a unicorn tattoo featuring their name on his forearm. “It’s steeped in something I’m actually amused by. What am I going to tell my parents? I sold my body for money.”