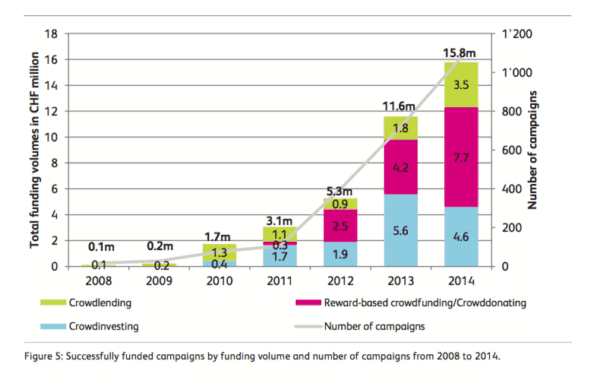 The Institute of Financial Services Zug IFZ, of the Lucerne School of Business, has returned to crowdfunding in a follow up to last years research on new forms of finance in Switzerland.  Crowdfunding has been evident in Switzerland since 2008. The authors note that in 2014, crowdfunding grew 36 %, a respectable amount, but a number that falls behind other countries around the world. The top line number, including debt, equity and rewards, hit 15.8 CHF million (about $17 million USD).  Debt based, or crowdlending, was the fastest growing segment almost doubling from year prior. Interestingly equity based declined 18%.  Rewards based remains the largest single segment, followed by equity and then peer to peer lending. 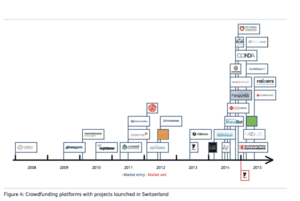 Within the Swiss market there are 30 different platforms but it is still considered a very early stage industry. The authors believe that moderate regulation would be conducive to future growth for the entire industry.

In the equity sector, or crowdfundinvesting as labeled by the study, only 4.6 CHF  million was raised in all of 2014 down from 5.6 CHF million. The average funding volume was CHF 460,000 and the average amount per investor was a solid CHF 23,400.  On the debt side (P2P Lending), the average raise was CHF 16,200 with individuals investing on average CHF 1,100.

The study is a good comparison for a wealthy, yet smaller country by population, to contrast trends across Europe – and around the world.  Authored by Prof. Dr. Andreas Dietrich and Simon Amrein, with assistance from Reto Wernli and Dr. Falk Kohlmann, this provides good information for the Swiss nation.  The report predicts the volume of crowdfunding in all sectors to hit between CHF 25 to 30 million for 2015.  Peer to peer lending will remain at the top of the list boosted by the expectation that SME loans will go live for the first time in 2015. Regulation may act as a catalyst for either further growth or as a deterrent. The current regulatory environment is one where FINMA provides individual rulings – not an optimal situation.  Information provided states that many platforms would prefer the certainty of a “moderate legal framework”.

You may register for the study here.