On Thursday, Playtonic Games, the creators of the Kickstarter success Yooka-Laylee, announced it has teamed up with Team17 to publish the highly anticipated video game. 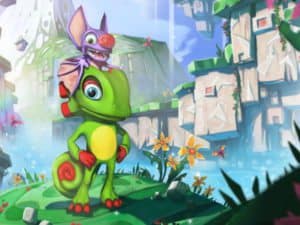 Yooka-Laylee is an all-new 3D platforming adventure for consoles and PC. During its run on the crowdfunding giant’s platform, the video game successfully captured £2,090,104 from 73,206 backers. Platonic Games declared in a recent update:

“Playtonic is exciting business types everywhere with the news that we’ve partnered with independent games label Team 17, which will assist with development of specific support areas of Yooka-Laylee.”

Explaining why backers should be excited about this partnership, the studio revealed:

“For Playtonic, it means that our team can now focus 100% on making Yooka-Laylee, without fussing over boring-but-necessary business stuff like certification, localization, and store management, while at the same time benefiting from the additional resources and vast experience of a seasoned game label. 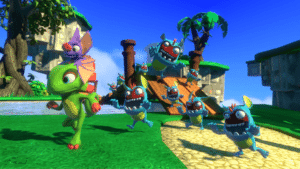 “For backers and fans, it means you’ll no doubt benefit via a much better game, not just thanks to Team 17’s vast experience in areas such as QA testing and publishing, but also due to the extra time our team will now spend creating, instead of filling in giant spread sheets.

“In short, it’s union that will allow Platonic to focus on making the best game possible for backers and fans, while ensuring that we deliver on all of our Kickstarter promises.”

“To clarify on one point: there are still no plans currently for a physical release. Though Team 17 has plenty of experience in boxed retail, the plan today remains for Yooka-Laylee to launch as a digital game on consoles, PC and Mac.”

“Playtonic was founded because our team wanted to creat the kind of games we used to, in the way that we used to: in a small, collaborative team in an environment that breeds creativity. We believe these philosophies appealed not only to us, but also to you, the fans – and through your incredible support of our Kickstarter you proved that we were at least half-right. 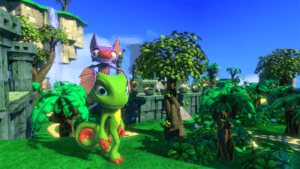 “Today, we’re heads down, full of caffeine (and cake), totally focused on delivering a game that lives up to your expectations and ticks every one of our Kickstarter promises. A quick look over my shoulder and I can see animations, characters, sprawling levels and new gameplay features flying in to the latest build… the pent-up passion from the whole team for this game is unstoppable, and we can’t wait to show you more of Yooka-Laylee in the future.

“In order for the Playtonic team to continue concentrating 100% of delivering the best game possible, we’re excited to announce that we’ve partnered with independent games label, Team 17, who will handle the long list of support tasks we need as an independent developer. 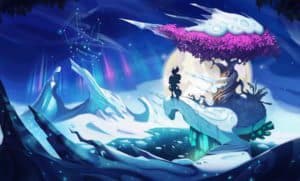 “From the start we said we’d welcome we’d welcome a partner that could genuinely improve the creation of Yooka-Laylee, but only if that relationship maintained our core principles and independence. Team 17 impressed us from day one with both its passion for the game (in fact, a lot of their staff are backers!) and its vast experience of collaborating with indie devs.”

“To clarify, this isn’t traditional publisher deal: Team 17 understands what we want to achieve as a studio and has created a unique partnership with us. Team 17 will improve Yooka-Laylee in a myriad of ways, not least in expanded localization (more languages!), QA testing, certification and store management – basically all the stuff that game creators don’t want to worry about.”

The game’s “estimated delivery” is set for October 2016.