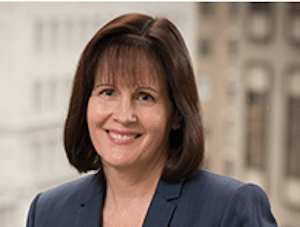 Carrie Dolan, CFO of Lending Club, has been named one of the 25 most powerful women in finance by American Banker.  Previously an executive with Charles Schwab, Dolan said that when she explained to friends and family she was leaving Schwab to join a money-losing startup, they thought she was nuts.  How times have changed.  Dolan joins a prestigious at number 11 that is largely populated by traditional financial firms.  The roster has been compile to “recognize women who have been the most impactful across the financial industry”.

“It’s an honor to be included in this list, along with so many other women who have been influential in their companies and across the financial sector,” said Dolan. “Helping to build Lending Club from a startup to a recognized brand has been very exciting – I’m thrilled to have the company’s progress recognized through this award and grateful to all the dedicated team members who helped make it happen.”

Dolan joined Lending Club in 2010.  Since that time the marketplace lending platform has grown rapidly becoming the largest platform of its kind in the country.  At the end of 2014, Lending Club completed its initial public offer – marking a significant milestone for the entire marketplace lending industry.  The IPO is one of the top 10 internet based offerings ever.

Renaud Laplanche, Lending Club founder and CEO said Dolan has been a driving force and inspirational leader at his company. “Her inclusion on this list is an indication not only of her achievements but of her growing influence in the industry,” stated Laplanche.

Dolan was previously named the 2015 Financial Woman of the Year by The Financial Women of San Francisco. She was selected by San Francisco Business Times as one of the Most Influential Women in the Bay Area in 2013 and 2014, and was named to the Forever Influential List in 2015, in recognition of her ongoing influence in the San Francisco Bay Area and the business sector. Carrie is a member of Financial Executives International (FEI), CNBC’s CFO Council, and Watermark’s CFO network.

Not only is it an important honor for Dolan to be included on the list, but it is also a sign as to how important the direct lending industry has become. Since launching in 2007, Lending Club has facilitated over $11.2 billion in consumer loans and has more than doubled annual loan volume each year.  Operationally the platform provides access to capital at a far lower cost than banks.  These savings may then be passed onto consumers.