Leading marketplace lending platform Prosper acquired an Israeli startup towards the end of 2015 called BillGuard.  BillGuard’s service allows consumers to track their spending across many accounts, budget effectively, and protect their money from wrongful charges while monitoring a user’s credit score. It may also become an effective conduit for users to use Prosper as a source of credit.

The San Francisco based online lender called the acquisition “transformative” at the time. Prosper has matched loans to investors for years now having facilitated approximately $5 billion to date. The BillGuard purchase, pegged at about $30 million, was a strategic shift to provide a more dynamic set of financial services for their growing consumer base.

BillGuard is part of the robust legion of startups that have helped validate the label of Israel being the “Startup Nation”.  In fact BillGuard is a portfolio company of perhaps the biggest champion of the Startup Nation mission, equity crowdfunding platform OurCrowd.

Aaron Vermut, CEO of Prosper, recently travelled to Israel to visit with Prosper’s newest subsidiary. In speaking with the Times of Israel, Vermut shared part of his mission;

“Over the past several years we have been reorganizing, trying to recreate the organization, redesigning our user interface, rewriting our tech stack and more … There’s something about the Israeli DNA that is different than what we have in Silicon Valley. By the time they get to work, most of the Israelis are older and more mature, have been through a full stint in the IDF, where they have to learn to operate as a team, even if they disagree on goals and ideas,” said Vermut. “This is a key part of best practices for a team – being able to coalesce around a leader and get the job done, while maintaining independent thought and creativity.”

Prosper is no long a small, agile startup. Employees may not be counted by the dozens as the roster has grown well into the hundreds. Part of the challenge of managing a fast growing firm is to keep the goals and objectives on focus while maintaining an environment of creativity and the ability to take risk and adapt. Prosper has gone from being an interesting convenience to being well on its well to be the established method of providing credit.

Vermut states the obvious that smaller groups are easier to manage. But Israeli companies possess interesting attributes as outlined by Vermut, entrepreneurs tend to be “older and more mature”.  The experience of having worked in the Israeli army (IDF) instills a sense of the mission as a team.

“This is a key part of best practices for a team – being able to coalesce around a leader and get the job done, while maintaining independent thought and creativity,” stated Vermut. 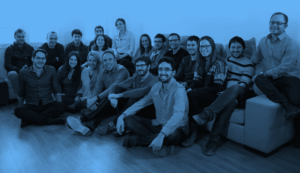 Providing credit online, and Fintech in general, is still in the very early days of adoption and its evolution. For the graybeards of Fintech it is important to foster and encourage a culture of disruption and change – otherwise they may join the list of traditional financial firms that struggle to keep up.

Prosper is not alone in its interest in the Israeli entrepreneurial ecosystem. The country has ambitions that belie it’s small population and limited geography – something proven by the global interest from the largest of investors.But if Prosper’s acquisition of BillGuard is any indication of future objectives it is clear that management will continue to push the envelope and think beyond matching investors to loans. The relationship with Israel and its “Silicon Wadi” may be the catalyst to keep it focused on Fintech innovation.