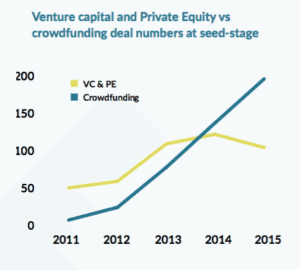 Beauhurst, a leading provider of data on high-growth UK companies, released “The Deal” its 2015/2016 report on equity fundraising for UK private fast-growth companies. Crowdfunding emerges as a leading force in seed investing and is expected to become one in growth investing as its average deal size grows.

The comprehensive report tracks every fundraising transaction involving high-growth UK companies at seed, venture and growth stage, including many that were not announced by a press release or mentioned in the press.  The report values the total 2015 market at £4.9 billion worth of investment raised in 2,989 transactions. This represents a healthy 26% increase over 2014. But the authors predict that the market will level off in 2016 as, among other issues, institutional investors continue to hold back from seed-stage investing.

The most notable trend of the year, however, is the ascension of crowdfunding.

Crowdfunding , led by equity crowdfunding platforms Seedrs, Crowdcube, Angels Den, Seedcamp and Collider, has become the dominant investor type in seed-investing; its dominance was reinforced by the fact that institutional seed-stage investors almost disappeared from the market in Q4.

Equity crowdfunding platforms also lead as single investors in venture stage, with Crowdcube ahead of Seedrs. But it has yet to become a force at the growth stage.

Across the three stages of investing, equity crowdfunding is now the second most active funder type after private equity firms, far ahead of angel networks and private investment vehicles. The authors write:

“Taking a step back, the biggest story for the market as a whole has to be the continued rise of equity crowdfunding platforms. This is the only investor type whose deal numbers increased by a significant amount (45%) between 2014 and 2015. We expect that, despite the increasing levels of controversy surrounding the sector, it will continue to facilitate more transactions than ever in 2016. As they establish themselves in the mainstream, crowdfunding platforms’ deal sizes will also grow. This may create a virtuous circle of greater investment and greater confidence in the new platforms.”

The 64 page free report can be downloaded upon registration. 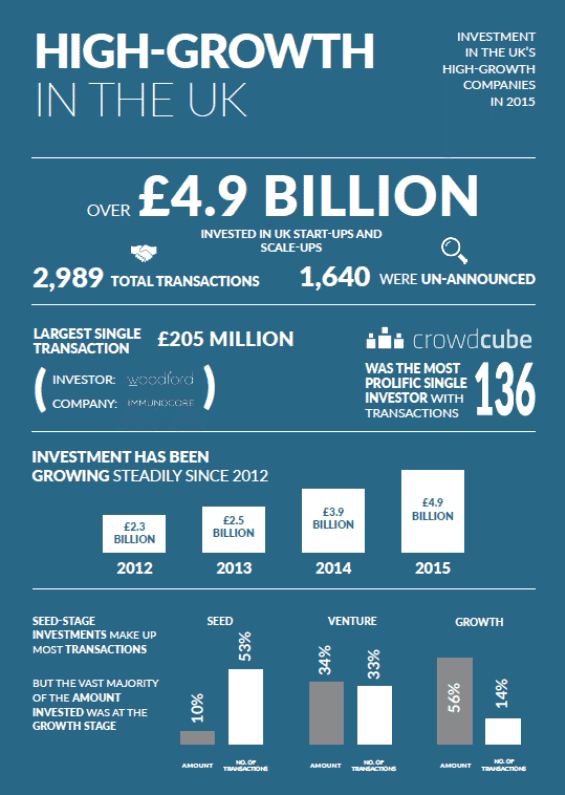