Helsinki based Fintech firm, Invesdor, announced on Tuesday it has opened its new equity offering. The company is seeking to raise €750,000 with a max of €1.5M as it prepares to its international position. Its previous offering successfully funded in just six days and achieved  €1 million from 143 investors, from 16 different countries.  The valuation at that time was pegged at just under €6 million. 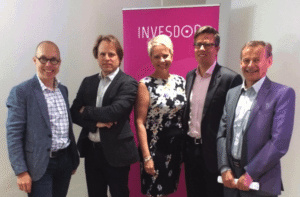 As previously reported, Invesdor, founded in 2012, launched as an equity crowdfunding platform but has since expanded into other products and other markets. Today the website offers both debt and equity for domestic and international issuing firms. Last year, it received a Europe-wide Markets in Financial Instruments Directive or “MiFID” investment firm license thus aiding their expansion. The MiFID license will ease the process of establishing operations in many EU countries.

Invesdor revealed that crowdfunding picked up more speed last month as several large European banks announced their entrance into the funding method’s markets either with their own platforms or with cooperative models. Invesdor CEO, Lasse Mäkelä, stated:

To date, Invesdor has raised approximately € 14 million for 57 equity offers. The company has experienced annual revenue increases of over 300% for 2015. Mäkelä recent stated:

“What we have created is a digital fundraising process that works for all kinds of companies. We are categorizing our companies as seed, early (turnover from 100,000 to 500,000), growth (upwards of 500,000) and an IPO…. One of the motivations for why I love what I’m doing is that we are protecting the small guy and making it (funding process) more transparent.”