The BottleShop, a craft beer importer and distributor is set to close its equity crowdfunding campaign on Crowdcube with nearly £400,000 in funding from more than 375 investors. The company originally sought to raise £350,000. 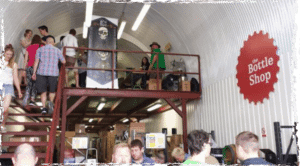 The company, which currently has bars in London, Margat, and Canterbury, distributes various breweries, which includes Omnipollo, Green Flash, and Modern Times. Its turnover has reportedly grown by £1 million annually since 2015 and its customer list represents the UK breweries such as Byron Hamburgers, BrewDog, Curzon Cinemas and Beer Merchants. Its Bermondsey tap-room has notably hosted Mikkeller and Omnipollo tap-takeovers, which almost doubled our average 2016 weekly takings earlier this year.

The BottleShop is now aiming to open a warehouse and bar in Manchester later this year to directly serve the North of England. The company also revealed:

“Many American breweries create beers designed to be refrigerated, treating beer like milk, cheese or fruit – it must be kept cool throughout its life. This investment will allow us to refrigerate our London warehouse and offer zero degrees of compromise for our customers. This will allow us to gain access to more prestigious, high-value beer as many US breweries won’t export without this assurance. We are in discussions with more internationally renowned breweries – but can only import their products when we meet their distribution standards.”

In a recent update, The BottleShop announced its online partnership with Ales by Mail for its ColdChain beer line:

“We always planned for our ColdChain beer to be available on online stores and sent in ColdChain boxes so customers can get completely refrigerated beer from brewery to their doorstep. This has taken a big step forward today with Ales by Mail signing-up to be our first online partner. We think having our ColdChain beer available via online stores is hugely exciting and if you agree then we’d love to have you support us by funding our campaign.”

The campaign is set to close later this evening.