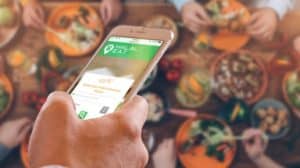 As previously reported, HalalEat, which was incorporated in 2013, launched its official commercial service in October 2015 and claims it is the UK’s first and leading on-demand halal takeaway portal. Last year, the company became a finalist of MassChallenge UK. Recently, HalalEat was named one of the five Muslim startups with a big future in the UK and beyond by Forbes.

“All our restaurant partners on our website are vetted and their claim to being ‘Halal’ are substantiated – their supply chain is vigorously checked as well as their produce on site. When you order from HalalEat, we can assure you in good faith (following our own checks) that the meat that you are eating is halal. The halal filter our website is unique to us – we don’t want to define halal for you, we know it means different things to different people; we give you the ability to filter out the restaurant services and environment which don’t fit your personal perception of halal.”

How to order is simple:

“Our halal filter lets you choose whether or not you mind alcohol on site, whether you only want to eat from a halal certificated restaurant, whether shisha is present or not and whether or not the restaurant has been self-certified.

All funds from the Seedrs campaign will be used to continue HalalEat’s expansion. The initiative is set to close later this fall.