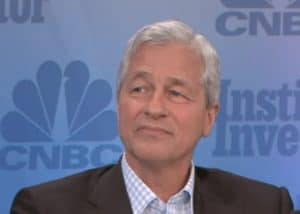 JPMorgan Chase CEO Jamie Dimon has been widely reported as bashing Bitcoin and cryptocurrency in general. Speaking at CNBC‘s Delivering Alpha conference, Dimon was asked a direct question as to his belief that Bitcoin was a fraud. Dimon separated Blockchain (Distributed Ledger Technology) from cryptocurrency. But then he attacked cryptocurrencies and said they were like Tulips.

Dimon said “it wasn’t a real thing” and eventually the government will “shut it down.” The emperor will have no clothes. Dimon did agree that Bitcoin probably was a better bet than currency in say, Venezuala, but his premise was the Feds will eventually roll and put a halt to the cryptocurrency phenomenon. Governments always want to keep control.

Yesterday, the Tyler Durden crew at ZeroHedge shared an interesting fact. JPM is purchasing BTC ETFs on European exchanges and they have screen captures to prove it. As the price of BTC tumbled the report highlighted that JPM was the fourth largest buyer with a steady bid. You gotta love it.

So why is JPM buying so much crypto when they believe it is bogus? Well it could be for a client account and at their request. But it could be for their own account. And why not? Traders love volatility and in recent weeks with the news out of China slowing BTC’s rise there has been plenty of it. Dimon was quoted saying he would fire any JPM trader who was in the Bitcoin market as it is “against our rules and they are stupid.”

So I wonder, who is the JPM trader who gets the boot tomorrow?

Jamie Dimon: Governments look at bitcoin as a novelty from CNBC.