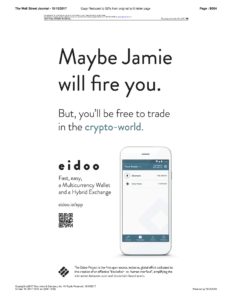 Eidoo has launched a new “blockchain asset experience,” designed with the goal to create a secure way for the masses to buy, sell, store, transfer and exchange blockchain-based digital assets. Eidoo’s integrated multi-currency wallet, hybrid exchange and Initial Coin Offering (ICO) engine is said to be a single “clean and easy-to-use mobile app.” Initially catering for Ethereum and all ERC20 tokens, Eidoo plans to add Bitcoin by Q1 2018 and will cater for many more cryptocurrencies in the future.

The launch follows an ICO where Eidoo reports it raised €20 million “within hours.” Launched on October 4th, at an exchange rate of $2.30 or 130 EDO tokens per ETH, approximately 80,000 in ether was raised. Eido says this significant interest in their ICO comes as total cryptocurrency market capitalization hits $151 Billion, up from $17 Billion at the beginning of the year. The ICO remains open until October 16th.

Founded by Natale Ferrara, the project is being developed by the Switzerland-based company with team that includes co-founders Marco Polci (a smart contract and token security audit expert) and Ferrara (also a co-founder of Blockchain Invest) as CTO and CFO respectively, plus senior advisor Paolo Rebuffo.

The Eidoo wallet is an evolving suite of products and services that currently includes an ICO engine enabling users to directly participate in ICOs from the app and a hybrid exchange which runs on the lightening network. The Eidoo road map also includes the launch of a Decentralized Market where users will be able to exchange generic goods and services in a decentralized and provably honest way using either an HSM or escrow system. 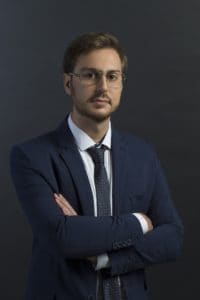 “The Eidoo project is dedicated to creating an effective blockchain-to-human interface that simplifies the interaction between users and blockchain-based assets without compromising the available technology. We are creating a single, easy-to-use, intuitive environment that caters for all possible cryptocurrency needs and we are delighted that thousands of people already back our vision, as expressed through the €20M in token sales we generated in the first few hours of the ICO. It’s an ambitious project, in a hugely dynamic world, but with our team of experts we will continue to evolve and improve technological efficiency, security and user experience. We’re hugely excited to bring the crypto world to the masses,” says Thomas Bertani, Eidoo CEO.

In a jab directed towards Jamie Dimon, CEO of JPM Chase, who recently bashed cryptocurrencies as a fraud, Eidoo published an advertisement in the print product of WSJ.com. That’s one way to get the attention of the analog finance world.